When McKinsey Comes to Town: The Hidden Influence of the World’s Most Powerful Consulting Firm By Walt Bogdani

Where Pete Buttigieg got his start. 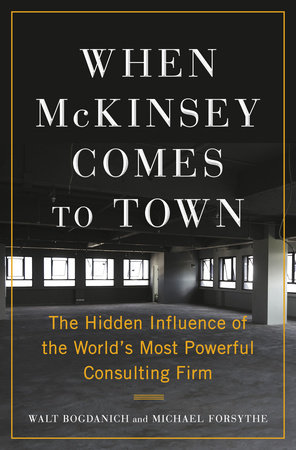 NEW YORK TIMES BESTSELLER • An explosive, deeply reported exposé of McKinsey & Company, the international consulting firm that advises corporations and governments, that highlights the often drastic impact of its work on employees and citizens around the world

“Meticulously reported, and ultimately devastating, this is an important book.” —Patrick Radden Keefe, New York Times bestselling author of Empire of Pain and Say Nothing

McKinsey & Company is the most prestigious consulting company in the world, earning billions of dollars in fees from major corporations and governments who turn to it to maximize their profits and enhance efficiency. McKinsey’s vaunted statement of values asserts that its role is to make the world a better place, and its reputation for excellence and discretion attracts top talent from universities around the world. But what does it actually do?

In When McKinsey Comes to Town, two prizewinning investigative journalists have written a portrait of the company sharply at odds with its public image. Often McKinsey’s advice boils down to major cost-cutting, including layoffs and maintenance reductions, to drive up short-term profits, thereby boosting a company’s stock price and the wealth of its executives who hire it, at the expense of workers and safety measures. McKinsey collects millions of dollars advising government agencies that also regulate McKinsey’s corporate clients. And the firm frequently advises competitors in the same industries, but denies that this presents any conflict of interest.

In one telling example, McKinsey advised a Chinese engineering company allied with the communist government which constructed artificial islands, now used as staging grounds for the Chinese Navy—while at the same time taking tens of millions of dollars from the Pentagon, whose chief aim is to counter Chinese aggression.

Shielded by NDAs, McKinsey has escaped public scrutiny despite its role in advising tobacco and vaping companies, purveyors of opioids, repressive governments, and oil companies. McKinsey helped insurance companies’ boost their profits by making it incredibly difficult for accident victims to get payments; worked its U.S. government contacts to let Wall Street firms evade scrutiny; enabled corruption in developing countries such as South Africa; undermined health-care programs in states across the country. And much more.

Bogdanich and Forsythe have penetrated the veil of secrecy surrounding McKinsey by conducting hundreds of interviews, obtaining tens of thousands of revelatory documents, and following rule #1 of investigative reporting: Follow the money.
When McKinsey Comes to Town is a landmark work of investigative reporting that amounts to a devastating portrait of a firm whose work has often made the world more unequal, more corrupt, and more dangerous.