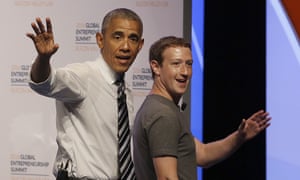 snapshot of America in the middle of June 2016. It is several days before the first great shock of the summer, the Brexit vote, and here in America, all is serene. The threat posed by Senator Bernie Sanders has been suppressed. The Republicans have chosen a preposterous windbag to lead them; the consensus is that he will be a pushover. For all the doubts and dissent of the last year, the leadership faction of the country’s professional class seem to have once again come out on top, and they are ready to accept the gratitude of the nation.

And so President Barack Obama did an interview with Business Week in which he was congratulated for his stewardship of the economy and asked “what industries” he might choose to join upon his retirement from the White House. The president replied as follows:

… what I will say is that – just to bring things full circle about innovation – the conversations I have with Silicon Valley and with venture capital pull together my interests in science and organization in a way I find really satisfying.