Poll: Nearly one in four in America would favor secession

Things are now moving along a lot faster than I would have ever thought. 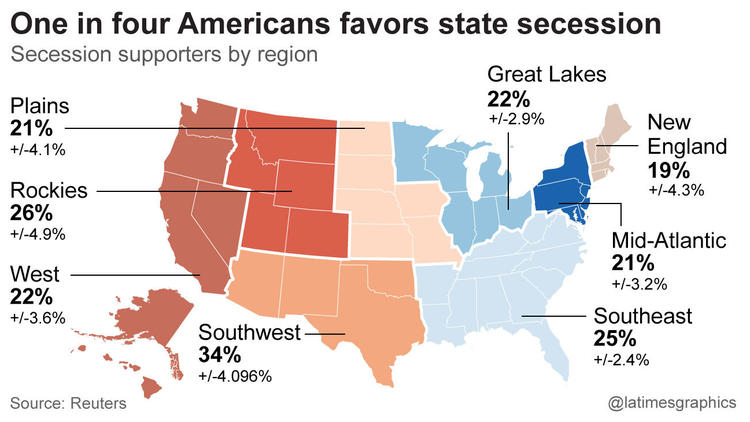 Nearly one out of four Americans is so fed up with Washington that they are prepared to not take it any more and would favor their state breaking away from the rest of the United States.

According to a Reuters/Ipsos poll released Friday, 23.9% of Americans polled from Aug. 23 through Sept. 16 said they strongly supported or tended to support the idea of their state breaking away from the country. About 53% of the 8,952 respondents strongly opposed or tended to oppose secession, slightly less than the percentage that kept Scotland in the United Kingdom.
cComments

Support for secession cuts across many lines, the poll found, but the West and Southwest, where the vision of rugged individualism still draws praise, seemed more inclined to back separation than the staid New England area. Younger and poorer folks were more likely to want to run for the exit.

Politically, conservatives and Republicans seem to like the idea of leaving more than Democrats. Among people who said they identified with the tea party, supporters of secession were actually in the majority, with 53%.

Before you start thinking about flipping around the nation’s motto from E pluribus unum to E unum pluribus, consider that the United States has long been a country having to cope with sectional, emotional, economic, racial and gender splits.

Hostilities between the North and South grated even as everyone was fighting the British, culminated in the Civil War, and, some would argue, continue to simmer. The expansion westward meant expanding the range of disputes between a frontier and the folks back on the East Coast.

The exact wording of the question was, “Do you support or oppose the idea of your state peacefully withdrawing from the United States of America and the federal government?”