Pan-Secessionism is Now a Mainstream Idea

The normal trajectory that takes place when radical ideas are introduced is that such ideas start off on the far fringes, and gradually move toward the mainstream, eventually became the majority opinion, and finally the established consensus. An idea starts to become mainstream when a substantial minority favors it. One of the most obvious examples of this process from recent decades is gay rights. Marijuana legalization/decriminalization is another. Trans rights is becoming such an issue. Reaching back further, other examples would be civil rights, abolishing the draft, interracial marriage, abortion rights, the 8 hour day, slavery abolition, women’s suffrage, parliamentary democracy, church/state separation, etc. Whether one thinks all of these causes were on the “right side of history” or not is beside the point. They won.  The concept of “pan-secessionism” that I have promoted on this website/blog for 20 years is now entering the mainstream, with 1/3 of the US population now expressing at least casual sympathy for secession by their particular geographical region or state (up from 1/4 only 7 years ago as the charts below indicate).

The concept of pan-secession is one that I picked up from some “sovereign citizen” types (who remain among the fringe of the fringe) around 25 years ago. I added a few tweaks of my own and developed a strategic formulation for 21st-century anarchism. I consider pan-secession to be the modern equivalent of the old anarchist and radical labor idea of the general strike. I’d argue there are two approaches to pan-secession. The narrow version merely involves territorial separation (like when the 13 colonies seceded from the British empire, when the Confederacy seceded from the USA, or when Sweden and Norway or the Czech Republic and Slovakia were separated). The broad version includes a hybrid of concepts like territorial secession, civil disobedience, counter-economics, dual power, consent withdrawal, general strikes, fourth generation warfare, etc. These are increasingly taking place as well as I have discussed here.

Given that ATS is an anarchist site, and that the concept of pan-secession is becoming mainstream, it should be pointed out that pan-secessionism is not anarchism, just as general strikes, counter-economics, civil disobedience, and armed struggle are not anarchism per se.  Pan-secessionism is simply a means of subverting Leviathan states and allied institutions. I would expect, for example, that if the USA dissolved into dozens of new countries (the same way the Communist expanse in Eurasia dissolved in the late 80s and early 90s) most of the new polities would be governed by mainstream ideologies. At present, most constituents and potential constituents for pan-secession are Democrats, Republicans, Independents, liberals, conservatives, and centrists, not anarchists or adherents of other fringe philosophies. That’s another battle. 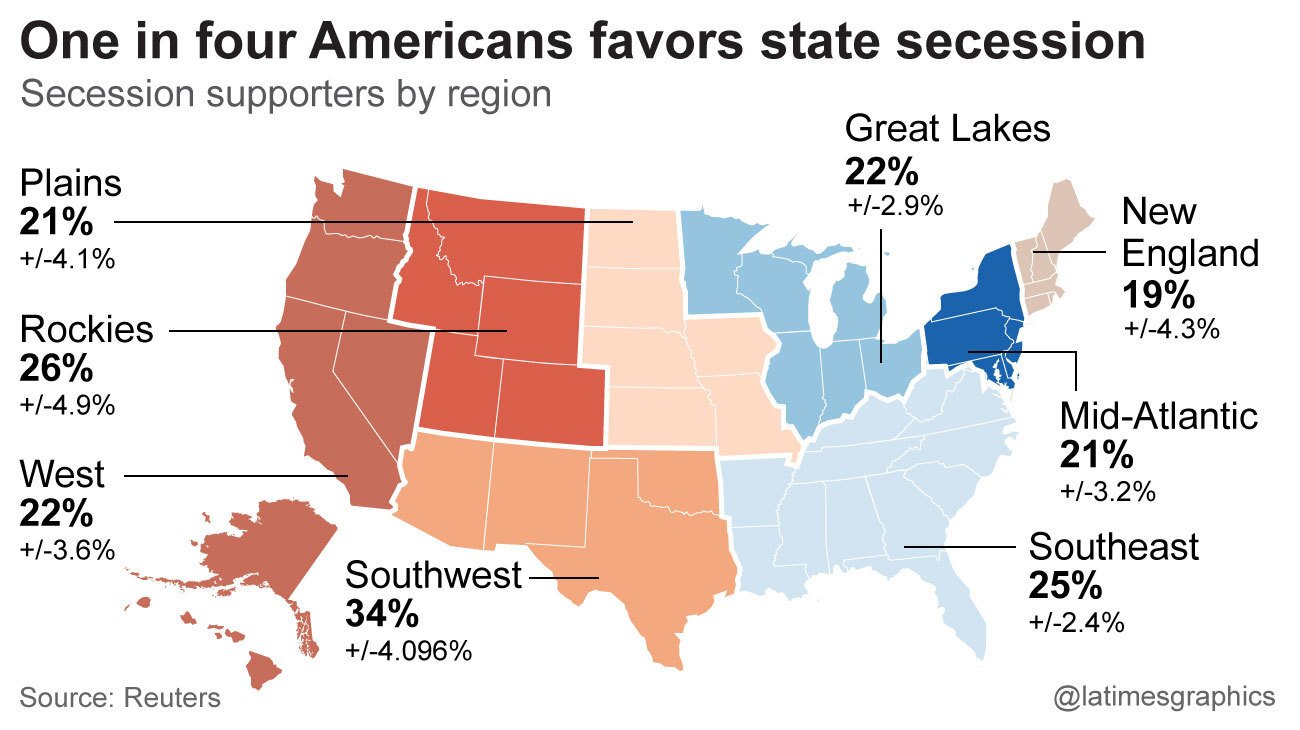