Hilariously, an article about anarchism appears in teen vogue magazine. It’s actually a pretty good article so far it goes. My one criticism is that it only focused on the leftist-activist version of anarchism, and not the wider range of anarchist thought. But nothing’s perfect. 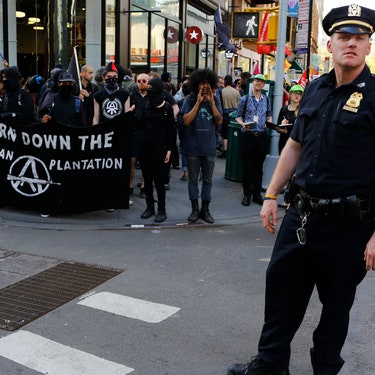 Writer Kim Kelly is an anarchist based in New York City and an organizer with the Metropolitan Anarchist Coordinating Council (MACC).

In a pop-cultural sense, at least, the idea of anarchy has been characterized by either a middle-fingers-up, no-parents-no-rules punk attitude, or a panicky, more conservative outlook used by national and state sources to represent violent chaos and disorder. Today, we can see an extremely serious, radical leftist political philosophy on T-shirts at Hot Topic.

So what is anarchism? What do those people raising black flags and circling A’s really want? Here’s what you need to know:

Anarchism is a radical, revolutionary leftist political philosophy that advocates for the abolition of government, hierarchy, and all other unequal systems of power. It seeks to replace what its proponents view as inherently oppressive institutions — like a capitalist society or the prison industrial complex — with nonhierarchical, horizontal structures powered by voluntary associations between people. Anarchists organize around a key set of principles, including horizontalism, mutual aid, autonomy, solidarity, direct action, and direct democracy, a form of democracy in which the people make decisions themselves via consensus (as opposed to representative democracy, of which the United States government is an example).