ISIS Attacks are Excuses for Censorship and Disarmament

The Paris terrorist attacks and San Bernardino shootings have ushered in a new era of urban terror. The combined death toll of both attacks was 146 dead with hundreds wounded. The response from American politicians, law enforcement and intelligence departments has varied, but is unified in their calls for expansion of government power to fight a terrorist threat that the the US had a hand in creating. Together, mass shootings and the threat of terrorism have been the primary fears upon which the ruling elite has played upon to legitimize their mass surveillance programs, mass disarmament plans, and expansion of their wars for global hegemony. Here is how they are doing it.

An editorial in the New York Times said that rifles were “marketed as tools of macho vigilantism and even insurrection” and said that politicians “reject the most basic restrictions on weapons of mass killing”. It is clear that the left wing of the global plutocracy wants us to fear and even hate armed civilians, though it remains entirely uncertain that gun ownership rates have anything to do with recent reductions in violent crime and homicide rates. Furthermore, mass shooting deaths accounted for only .09% of homicides from 1984 to 2014. Most recently, President Obama is pushing for an executive order to expand background checks and close the so-called “gun show loophole” that allows people to buy weapons without a background check at gun shows. Though, again, it is unclear if such measures would have prevented any recent terrorist attack or mass shooting. In fact, it is believed and almost assured that the Paris terrorist attacks were carried out with weapons smuggled in from the Balkans and other European nations with a thriving black market in firearms. How are measures designed to keep guns out of the hands of citizens supposed to stop terrorists? One can only conclude that they are not supposed to stop terrorists, only stop people with intentions of so called “macho vigilantism” and “insurrection,” also known as US citizens.

The FBI wants to read your emails and texts, and listen to your phone calls.

Despite the massive surveillance powers of the National Security Administration, the FBI and CIA have long lamented the public’s access to easy encryption tools. Particularly targeted are domestic technology companies such as Apple, Google and others who often build security measures into the communication systems they provide to the public. Again, it is unclear how this would have stopped the Paris terrorist attacks. It is believed that encrypted communication wasn’t even used by terrorist suspects in the Paris terror attacks, and they may have even used multi-player chat on gaming consoles to communicate. Intercepting terrorist communications appears to be a game of cat and mouse, with the privacy of citizens deemed expendable. I would even go so far as to say terror is a convenient excuse for invasion of our privacy.

Trump and Clinton both want to shut down the internet. 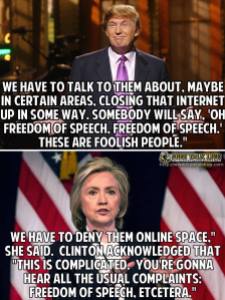 “We’re losing a lot of people because of the Internet and we have to do something. We have to go see Bill Gates and a lot of different people that really understand what’s happening. We have to talk to them, maybe in certain areas closing that Internet up in some way.

Somebody will say, ‘oh, freedom of speech, freedom of speech.’ These are foolish people… we’ve got to maybe do something with the Internet because they are recruiting by the thousands, they are leaving our country and then when they come back, we take them back.”

“You’re going to hear all of the usual complaints, you know, freedom of speech, et cetera. But if we truly are in a war against terrorism and we are truly looking for ways to shut off their funding, shut off the flow of foreign fighters, then we’ve got to shut off their means of communicating. It’s more complicated with some of what they do on encrypted apps, and I’m well aware of that, and that requires even more thinking about how to do it.”

Enough said. Neither of these people understands or appreciates freedom of speech or the right to privacy. They may not even understand how the internet works.

Since 2006 over 90,000 military rifles, 800 armored vehicles (including more than 400 Mine Resistant Ambush Protected vehicles) and other weaponry have transferred from the Department of Defense to local law enforcement agencies. Protestors in Ferguson were faced with police officers armed with weapons of war. In response, President Obama scaled back the scope of the program, removing such items as weaponized aircraft, bayonets and grenade launchers from the list of surplus military gear available to law enforcement. But since the San Bernardino shootings, which featured heavily armed police riding armored vehicles through the streets, some politicians have called for expansion of the program. The Boston Marathon bombing saw a similar response from both law enforcement and the public’s willingness to accept martial law as the police and fleeing terrorists turned American streets into temporary war zones.

The government doesn’t trust it’s own citizens, and may even dislike them.

It seems that US citizens are to remain both scared and compliant as the US government tightens its grip on our freedoms at home and expands it’s power abroad. The “terrorist boogie man,” whether foreign or domestic, is invoked to ensure that us “macho vigilantes” or “insurrectionists” remain disarmed, monitored, and scared. It should be clear by now that both the right and left wings of the ruling class, each in their own way, support expansion of domestic power at the expense of their citizens. This is not “Left versus Right” but “Us versus Them.”