These were some thoughts I originally posted during a social media discussion on the current Presidential candidates.

“I lean towards the view that U.S. Presidents are similar to corporate CEOs in the sense that, yes, they have their own objectives and interests, BUT their primary job is to serve as chief executive for the Power Elite (see C. Wright Mills and William Domhoff) just like a CEO is the front man for the Board of Directors and major shareholders. The President’s task is to implement whatever policies reflect the general consensus of Power Elite opinion. For instance, I think the major banksters poured money into getting Obama elected initially because the Republicans had become such an ineffective embarrassment. A president who defies Power Elite opinion to too great a degree will be severely undermined if not destroyed (see Salvador Allende). In other words, it doesn’t matter that much who the actual man is, he can’t really act outside the context of ruling class consensus in any particularly significant way.

The main difference between Democrats and Republicans is the ruling class factions they represent. The Repugnicans tend to represent the right-wing of the ruling class, e.g. old monied WASP elites and the Sunbelt insurgents that emerged following WW2 in the South and Southwest (Texas oil, for example) plus the neocons (right-wing of the Jewish elite, which is about 30% of the plutocracy). The Democraps tend to represent newer more high-tech industries (Silicon Valley and Hollywood, for example), elites among traditional minority groups, urban cosmopolitan technocrats, what Orwell called the “New Class,” etc.

I don’t think there’s any hope for a third party to actually win the presidency. Presidential elections are cost prohibitive to third parties. The media would vilify any competitive third party candidate and ballot access laws are highly restrictive as well. The exception might be a mega-billionaire who buys their way in like Ross Perot.

Trump is only worth about $4 billion. To run a credible, successful campaign, he’d need to spend $1 billion. I doubt he has that much liquidity, or that he’s be willing to spend it if he did. When Perot ran for Prez in ’92 it cost about $100 million to run a credible campaign. That’s increased about 10 tens since then, making a self-funded campaign cost prohibitive to everyone except Bill Gates, George Soros, or Warren Buffet. For Trump to be a successful candidate, he’d need real backers. Plus, the media would be overwhelmingly opposed to him, which he would have to spend extra to counter.

The main reason to prefer Democrats over the Republicans is that the neocons are not as deeply embedded in the Democratic apparatus, although that could change as many of them seem rather sympathetic to Hillary, and she’s not above doing their bidding. http://www.globalresearch.ca/hillary-clinton-if…/5460484

I think Webb, Sanders, and Chafee are all superior to Hillary, though it would be an uphill battle for any of them. The Republicans are a collection of freaks and sociopaths. Ironically, Trump is their best candidate because he’s the least in bed with the neocons as his comments about McCain and Krauthammer indicate.

The Holy Grail in this is to figure out how to break the power of the banks and the military-industrial complex. One way might be a Gorbachev-like situation where an reformist head of state sets a process in motion that inadvertently has the effect of unraveling the system. Another might be a Ba’athist or Chavez style coup by reform oriented military officers. Another might be secession by regions and localities similar to the secession by the Soviet republics towards the end of the USSR (or some combination of all of these).

If electoral politics is to be the answer, I think the way to do it would be for a populist mass revolutionary movement to work to obtain dominance in the majority of state and local governments, while bypassing the federal system, and then withdrawing from the federal system altogether, thereby engineering a Soviet-like collapse. From there the next step would be to initiate an Iceland-style crackdown on the banksters, and withdrawal of foreign troops to local military bases. For this to happen, the military would have to either come over to the side of the revolutionaries or merely dissolve by means of internal fracturing. Meanwhile, the System would fight tooth and nail to survive, of course, either by attempting a coup of their own, attempting to pacify or buy off the radicals with a carrot rather than a stick, or attempting to play off different groups against one another in a divide and conquer strategy. There would need to be some contingency plans for resisting all of this, and there would need to be a pre-existing alternative infrastructure in place to fill the power vacuum when the system collapsed. Needless to say, there is currently no movement or group in the US that would be capable of doing any of this.

I can just imagine Americans trying to pull off something comparable to what is presently going on in Rojava. What a basket case that would be. http://attackthesystem.com/2015/07/21/anarchy-lives-rojava/” 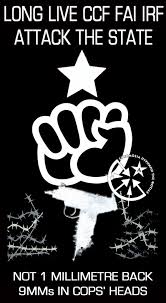