Alex Vitale’s book is probably the most comprehensive scholarly work on this topic at present. Thanks to Vince for the summary. 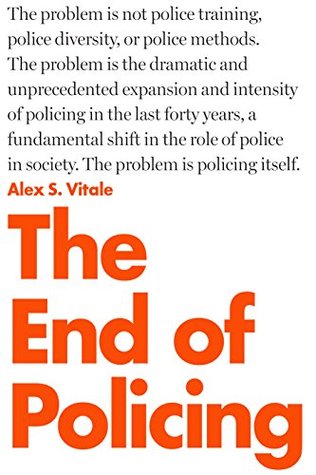 – The origin of policing as a control mechanism for the upper class and rich to suppress the lower class and minorities. Strike breaking, enforcement of racial segregation, and punishment of supposedly immoral but non criminal behavior.
– The disaster that is the War on Drugs, which was originally conceived to control and suppress racial groups and political opponents. The War on Drugs does almost nothing to actually limit the availability of drugs or even deter drug addiction and instead its enforcement represents a massive threat to civil and human rights.
– The misguided use of police to solve social problems that they simply are note equipped to handle. Homelessness is a social problem, yet homelessness is essentially criminalized throughout the US. Portland police, for instance, spend most of their day attempting to address (while armed) the social, mental, and material needs of our exploding homeless population.
– The targeting of young minorities through gang enforcement, which operates under fantasies, fiction and outright lies about what street gangs are and how they operate. Gang enforcement units across the country do little but criminalize young minorities.
–Legalize gambling (in homes and on the streets), prostitution, and drugs. Enforcement of these vices does nothing but eat up city budgets and criminalize low income neighborhoods and their residents. Punitive measures do nothing to curb these vices, and instead put them in the hands of organized crime.
–oung teens and young adults need jobs and sources of income. Decriminalize all forms of street hustling: selling loose cigarettes, scalping tickets, in-home hair styling and haircuts, and street vending to name a few. These economic activities are suppressed by the police. Self sufficiency for the poorest people in this country is criminalized.