The cockroaches are coming out of the baseboards. 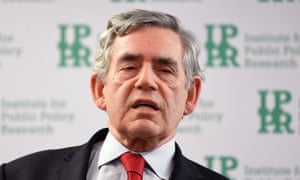 Gordon Brown has urged world leaders to create a temporary form of global government to tackle the twin medical and economic crises caused by the Covid-19 pandemic.

The former Labour prime minister, who was at the centre of the international efforts to tackle the impact of the near-meltdown of the banks in 2008, said there was a need for a taskforce involving world leaders, health experts and the heads of the international organisations that would have executive powers to coordinate the response.

A virtual meeting of the G20 group of developed and developing countries, chaired by Saudi Arabia, will be held on Thursday, but Brown said it would have been preferable to have also included the UN security council.