My assessment of the Trump presidency thus far. When Donald Trump’s seemingly maverick presidential campaign began to accelerate in 2016, both the Left and Right in domestic U.S. politics began to formulate predictable reactions almost on cue. Virtually the entire spectrum of the American right-wing, save the seeming spoil sports of the (neo-Trotskyist) neoconservative milieu, began heralding “The Donald” as the savior of (pick one) the American nation, the white race, the free market, the working class, the Christian faith, traditional values, or something or other. Such was the attitude of virtually the entire configuration of the Alt-Right/Lite, ordinary FOX News watching Republican voters, white nationalists, the religious right, and not a few libertarians. Of course, the Left reacted with a parallel reflex, insisting that Trump was the second coming of Hitler, or at least Mussolini or at the bare minimum Franco. In the weeks leading up to the election I was constantly getting messages from right-wing friends saying things like “Hope you’re on the Trump train!” and from left-wing friends saying “Hope you’re voting against the fascist!” Of course, being the contrarian that I am, I declined to get aboard any trains, and I voted for the same candidate I always vote for, i.e. the illustrious Nobody. 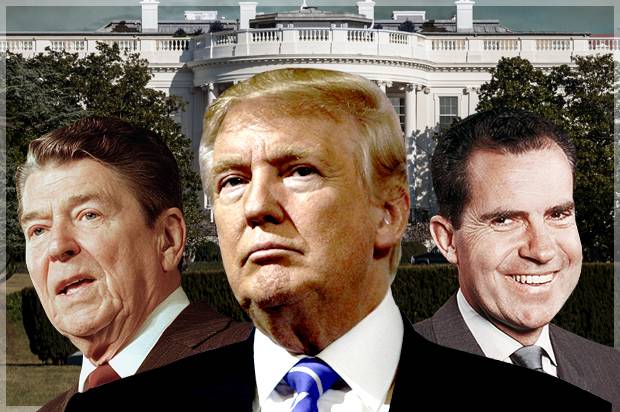