This is more or less how I thought the Iraq War would turn out when it began in 2003. The progression of events has been very similar to what happened in Vietnam and Cambodia. An invasion, followed by destabilization, an unpopular occupation, a growing insurgency, a turn of public opinion against the war within the domestic USA, a series of failed puppet regimes, and eventual withdrawal, followed by several years of civil war and the eventual coming to power of some of the worst elements imaginable that managed to crawl out of the sewers during the period of chaos.

Watch above: Islamic militants paraded in the northern town of Mosul with many of the gunmen cruising in armored vehicles apparently seized from Iraqi forces.

“The Islamic Republic of Iran will apply all its efforts on the international and regional levels to confront terrorism,” Rouhani told Maliki, according to the official IRNA news agency.

A prominent Shiite cleric in Karbala, Sheik Abdul Mahdi Karbalai, told worshipers during Friday prayers that it was every Iraqi’s civic duty to take up arms and defend the country against the militants aiming to create a proto-state spanning Iraq and Syria and ruled by Islamic sharia law. 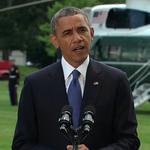 “All citizens who are able to bear arms and fight the terrorists in defense of their nation, people and holy sites should volunteer and join the security forces to achieve this holy aim,” Karbalai urged in his sermon.

Karbalai, who represents Iraq’s most revered spiritual leader, Grand Ayatollah Ali Sistani, said anyone who sacrifices his life “in defense of his country, people, and honor, will be a martyr.”

The Defense Ministry in Baghdad announced the opening of 23 recruitment centers across eight Iraqi provinces to arm and deploy volunteers.

The cleric’s appeal followed fresh advances by the ISIS militants, who seized Jalula and Sadiyah in Diyala province, about 80 miles and 60 miles northeast of Baghdad, respectively. Early this week they conquered Mosul, Iraq’s biggest city north of Baghdad, and rolled over Sunni-populated towns and cities from the Syrian border as far south as some suburbs of the capital.

ISIS gunmen offered the Iraqi government forces safe passage out of the two cities taken Friday in exchange for abandoning their weapons and vehicles, residents reported.
The Islamic Republic of Iran will apply all its efforts on the international and regional levels to confront terrorism – Iranian President Hassan Rouhani
The Iraqi army, like most of the country’s shaky institutions, is riven with corruption and sectarian divides. Maliki, the hard-line Shiite in power since 2006, has failed to create a government that includes representation of the Sunni minority or provides fair access to jobs, services and the nation’s huge oil wealth. Sunni resentment of the central government has made their areas easy conquests for ISIS, considered one of the most potent extremist groups in the world and its leader the ideological successor to Al Qaeda founder Osama bin Laden.

In London, U.S. Secretary of State John F. Kerry said Friday that the Obama administration was considering how to help Baghdad put down the rebellion because the militants are a threat not just to Iraq but to the entire world.

“Every country that understands the importance of stability in the Middle East needs to be concerned about what is happening,” Kerry said. “That is why I am confident the United States will move rapidly and confidently in order to join with its allies in dealing with this challenge.”

Kerry said the latest violence in Iraq should be a “wake-up call” to Maliki to build a more inclusive and responsive government.

In Geneva, a spokesman for the U.N. Human Rights Commission said ISIS fighters were reported to be summarily executing Iraqi soldiers who remained in Mosul, as well as others identified as loyal to the Baghdad leadership.

An unknown number of soldiers and at least 17 civilians were slain by the militants on a single street in Mosul, said Rupert Colville, spokesman for the world body’s rights office.