Anarchists, Get Up Off Your Asses and Get Strong!

Anarchists! You have already read that you need to get up off your asses and get moving by organizing in our 10 core demographics. Now it’s time to think about how you can become an effective warrior by getting healthy, strong and powerful. We need more anarchist warriors in top physical form. Here are some resources that will show you how to get there. The common theme in all of them is that they tell you to lift heavy stuff and eat a lot of high quality meat and veggies. I’m sure you could do alright on a vegetarian diet, but animal fats and proteins are essential for building muscle. Also, these are strength training programs for the most part; not body building programs. To be an effective warrior you need to be well rounded, which means lean, mean, powerful, fast, and agile.

Mark Sisson is the “Go Primal” guru. His program for nutrition and health is pretty simple. His primal version of the food pyramid isn’t tainted by any agricultural conglomerates; and it inspired by what man-animals have been eating over the past 100,000 years or so. The argument he makes it that this is the diet we are designed to eat.

He also says you should move like a human: walk a lot, lift heavy stuff a few times a week, and do all out sprints once a week. Imagine you’re a caveman; in other words, man in his natural habitat and state. It’s likely that you spend as much time as possible lounging, but probably have to walk a lot to go gather berries, vegetables and nuts. You probably have to walk many miles a week in search of herds of animals. You’re likely moving heavy stuff around to build shelters, haul your kill back to the cave, and carry your fallen hunting comrades when they are gored by a horned animal. And you probably have to sprint after your dinner once or twice a week; and even sprint so that you aren’t dinner yourself every once in a while. The point is to develop a training program that mimics this sort of activity.

His article How to gain weight and build muscle is a great place to start for young, aspiring anarchist warriors.

Mehdi Hadim is not a native english speaker (he is from Brussels) and parts of his website read like an infomercial. But what he is doing with his business model is pretty amazing and very forward thinking. He is giving away as much information as he can for free. The only thing you pay for is to be in his “inner circle” where you get a little bit of individual coaching from Mehdi himself as well as mentoring from his online community.

His 5X5 program is what got me started in strength training. You will be starting off with an empty bar; very little weight. You’ll look like a pussy in the weight room. Just remember, in order to get strong so you can more effectively overthrow the state you have to start at the beginning. There are no short cuts.

He provides free downloads and apps to track your progress and tell you exactly how much you should be lifting during each training session (you aren’t “working out;” throw that term out of your vocabulary. You are training to overthrow the state.) He also has a nutrition program that looks remarkably like the one from Mark’s Daily Apple. It’s encouraging to get the same information from multiple sources. He doesn’t really have anything to say on other exercises and training like Mark’s Daily Apple and his love of sprints and long leisurely walks. Mark’s Daily Apple is more big picture, Stronglifts is more specialized on strength gains.

Mark Rippetoe in his book Starting Strength will take you down the rabbit hole of barbell strength training. The book is written for beginners, but goes into expert detail into each of the major compound lifts, how you should do them, and why. Additionally, his training program is designed for athletes; which means it is designed for real world applications of strength and power. If you need the physical ability to hit harder, swing a rifle onto target faster, spring from an ambush, jump a fence at a dead sprint, or explode out of a submission lock then this program will give your body the foundation it needs. The big differences between Starting Strength and Stronglifts is that Starting Strength has you doing 3 sets of 5 in most exercises instead of 5 sets of 5 in Stronglifts; and instead of doing barbell rows you will be doing power cleans. Power cleans are important because they train your body to accelerate strength. This means explosive power as opposed to simple, slow strength. When a statist thug has you from behind with a baton across your throat you’ll be glad that you can power clean almost as much as you can bench; because in less than half a second that thug will have 160 pounds of lean muscle flying through the air and out of his meek grip. Now watch this woman power clean.

This is the program I am currently on and I have been making impressive gains. This is not unusual. Any beginner that sticks to the program will see impressive gains. I’m in my early thirties and have been a cross country runner my whole life. I gave that shit up, went primal, bought Mark Rippetoe’s book and have gained 10 pounds of solid muscle and power in 6 months. If you’re a young anarchist in your twenties, then you’ll do even better.

I’m not a Crossfitter myself but I believe that there a few reasons why an anarchist warrior should study this program. It is my understanding that Mark Rippetoe developed their barbell training program; so you can expect that the strength training component of this program will at least be on the right track. However, I’m told that the quality of coaching varies wildly from one Crossfit gym to another; apparently they give out Crossfit certifications to trainers like candy. Another reason to look at Crossfit is that they offer a well rounded program that should not only strengthen your muscles, but improve your endurance, agility, speed and other components of exercise and body movement. A third reason to look at Crossfit is their culture. Some call them cult-like, which is a plus in my book. As an anarchist looking to turn himself and a small handful of comrades (choose them extremely carefully) into a fighting unit you need to build a culture around your training and exercise. You need to start a gang. Crossfit has successfully accomplished something like this across the United States; albeit not in the demographic we are trying to recruit, and not with the same ideology (or any ideology, for that matter.) And the final reason to look at Crossfit:

This is the Attack the System/American Revolutionary Vanguard portion of the program. Humans are social creatures. Go read Jack Donovan’s book, The Way of Men. Read a great review of the book from an anarchist perspective at our sister site, written by our very own R.J. Jacob. The tactical unit, the gang, is the building block of human society. Any anarchist revolution we can expect to ever fight will be fought between small gangs of men allied together in a larger network against small gangs of men allied together in a larger network. Our tactical gangs need to be stronger, smarter, more dedicated and more inspired than theirs. This means training together. This doesn’t mean exposing yourself to infiltration by the authorities; it means your closest friends. They may not even be anarchists; but when the shit hits the fan and civilization is crumbling around them then their ideological loyalties will be up for grabs. Train with your gang. Encourage one another. Build unbreakable bonds. You may have to go into battle with these men one day. 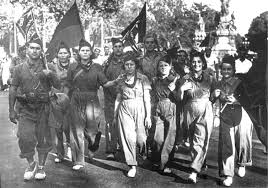