Any critique of modern states must necessarily include a critique of scientism and the therapeutic state, both of which are essential elements of the ideological superstructure of modern ruling classes, with physicians, “mental health experts,” and scientists being primary sectors of the modern priesthood. Thomas Szasz nailed this decades ago. 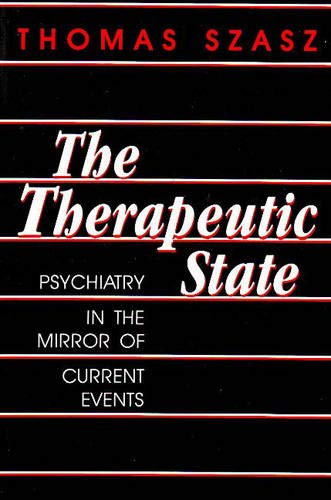 Thomas Szasz has been challenging the very existence of “mental illness” for over twenty-five years. His advocacy of freedom of choice and the abolition of involuntary psychiatry has made him America’s most controversial psychiatrist.

The Therapeutic State is a unique collection of topical essays about what the author calls “one of the grandest illusions of our age, mental illness, and the quixotic crusade against it.” Pivoting his analysis on news-making events, Szasz exposes the fallacies of our present penchant for interpreting the behavior of “sane” persons as goal-directed and therefore sensible, and the behavior of “insane” persons as caused by a “mental illness” and therefore senseless. In a series of diverse short pieces, originally published in newspapers and magazines, the author shows us that individual liberty and responsibility are indivisible, and that we cannot protect ourselves against coercive psychiatry’s threats to liberty so long as we persist in using psychiatric ideas and interventions to evade responsibility.

Szasz’s recommendation is simple but radical: So-called mental patients should be treated like other people – as no more subject to loss of liberty or entitled to excuses from responsibility than anyone else. Psychiatrists should be treated like other professionals – having no more power to inculpate innocent persons or to expurgate guilty ones than, say, accountants or architects. In short, our aim should be to disarm psychiatrists, much as the Founding Fathers disarmed priests. Nothing less can free us from the “benefits” and “harms” of the Therapeutic State.