This book is a must-read or anyone who is interested in how the modern American police state developed. This was originally published in the mid-1990s and describes how drug prohibition has been used as a smokescreen for the development of a large and intense as police state as would be functionally possible within the context of liberal democracy. Of course, the subsequent “war on terrorism” of the past 20 years has only consolidated what was originally described in this book. 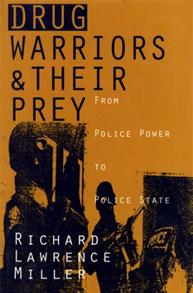 The war on drugs is a war on ordinary people. Using that premise, historian Richard Lawrence Miller analyzes America’s drug war with passion seldom encountered in scholarly writing. Miller presents numerous examples of drug law enforcement gone amok, as police and courts threaten the happiness, property, and even lives of victims—some of whom are never charged with a drug crime, let alone convicted of one. Miller not only argues that criminal justice zealots are harming the democracy they are sworn to protect, but that authoritarians unfriendly to democracy are stoking public fear in order to convince citizens to relinquish traditional legal rights. Those are the very rights that thwart implementation of an agenda of social control through government power. Miller contends that an imaginary drug crisis has been manufactured by authoritarians in order to mask their war on democracy. He not only examines numerous civil rights sacrificed in the name of drugs, but demonstrates how their loss harms ordinary Americans in their everyday lives. Showing how the war on drug users fits into a destruction process that can lead to mass murder, Miller calls for an end to the war before it proceeds deeper into the destruction process.

This is a book for anyone who wonders about the value of civil liberties, and for anyone who wonders why people seek to destroy their neighbors. Using voluminous examples of drug law enforcement victimizing blameless people, this book demonstrates how the loss of civil liberties in the name of drugs threatens law-abiding Americans at work and at home.