A review of Disaster Fitness: Make Your Demons Do the Work, by Ann Sterzinger and Ann Hedonia. 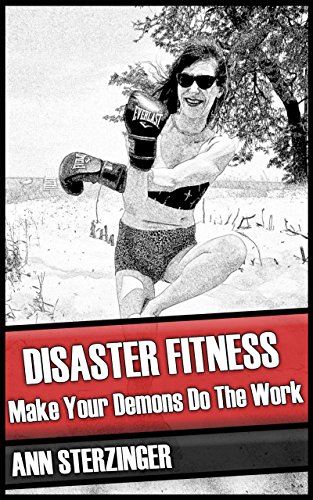 I confess to having never been a fan of so-called “self-help” books. Mostly, these kinds of works have always struck me as having goofy titles and charlatans for authors, and nothing of any real value. Some years ago, I was involved with a company where my division head used to hand out copies of Norman Vincent Peale’s The Power of Positive Thinking, a quasi-Christian work written in 1952, for Christ’s sake (no pun intended). It was a book my supervisor seemed to think was vitally important for his staff members to read. The same guy used to hand out copies of books by Joel Osteen (WTF?). Most self-help books are based to some degree on the model that Peale made a fortune from in the mid-twentieth century. Just throw out a lot of cheery-sounding sloganeering, combined with some quasi-Christian or quasi-Buddhist or hippie New Age nonsense, plus some basic common sense ideas that everyone over the age of fifteen ought to be able to figure out anyway. Do all this while claiming to possess some special path to financial success, spiritual enlightenment, and good health, and you’ve got an instant best-seller so long as you’re willing to pay for advertising space in the National Enquirer.

As the reader of this review can tell by now, I generally detest self-help books. That’s why I was pleasantly surprised by Disaster Fitness: Make Your Demons Do the Work, by Ann Sterzinger and Ann Hedonia (whom I suspect are probably different names for the same person). Suffice to say, this isn’t the kind of self-help book you would have found on the dresser in your mother’s bedroom when you were a kid. In fact, it’s the kind of book that might’ve gotten you suspended from school, particularly if you went to some crappy backwoods Midwestern public school full of losers and shitheads like the author did during her formative years. Seriously, the author(s’)’s description of her early life as a junior high school nerd kid actually makes you feel for her a bit, and leaves you with no doubt as to why she grew up to possess so many inner demons.

Ann Sterzinger is no Tony Robbins making a perfectly polished presentation to a gullible audience. She’s no Richard Simmons spinning all kinds of silly “no pain, no gain” hype in the style of a transsexual football coach. Instead, the author places all of her past trauma, pain, and dysfunction on full display for the reader in a way that is rather dark, and yet manages to be inspiring at the same time, mostly because the reader is left thinking, “Hey, if persistent exercise is helpful even for this fucked-up chick, it might actually help me as well!” But the author’s story is actually a very compelling one. Ann Sterzinger describes a childhood that can also be characterized as lame and an adolescence that was even worse. She discusses how she was the Steve Urkel of her middle school at a time when nerds were most certainly not cool. However, it was during this time that she discovered drugs. Not the usual kinds, but the natural endorphins found in the human body. It was while running track as a depressed thirteen-year-old that Ann came to understand the therapeutic value of exercise. Apparently, she has been an exercise junkie ever since.

This book is a refreshing departure from virtually all other self-help books I have ever encountered in that it appears to be entirely honest to a painful degree. There is no cheery sentimentalism in this book. None of the “fulfill your potential” crap that everyone from high school guidance counselors to military recruiters try to push down the throats of naïve kids (Seriously, has anyone ever considered that someone whose advice was worth listening to would certainly not be working as a high school guidance counselor or an army recruiter which, frankly speaking, are jobs for losers?). Ann Sterzinger is by no means an aspiring motivational speaker of the “You are somebody!” mode. Instead, her message is more along the lines of “Maybe you’re nobody, but this helped me, and maybe it will help you.” A kind of cynical optimism that is amazingly honest and refreshing, indeed.