A self-managed, libertarian penal system? That sounds like something right out of the ARV-ATS program.

In a country where jails are seen as ticking timebombs, a system of self-rule among inmates has proved a striking success 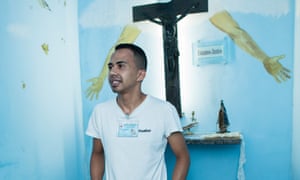 Renato Da Silva Junior harbours ambitions of becoming a lawyer. There is just one obstacle: he is a quarter of the way through serving a 20-year jail sentence for murder.

“My dreams are bigger than my mistakes,” says Da Silva, a slightly built man with a broad smile. “I am doing everything to get out of here as soon as I can.”

Da Silva, 28, an inmate at the men’s prison in Itaúna, a town in Minas Gerais, south-east Brazil, is chipping away at his sentence and has already reduced it by two years through work and study at the Association for Protection and Assistance to Convicts (Apac) prison. Here, inmates wear their own clothes, prepare their own food and are even in charge of security. At an Apac jail, there are no guards or weapons, and inmates literally hold the keys.