Who Gets Counted as a “True” Anarchist?

Incessant debate rages among self-proclaimed anarchists concerning who should be counted as a “true” anarchist, with proponents of each of the many kinds of anarchism claiming the right to special recognition of their particular sect. But this would seem to miss the point. The purpose of anarchism is to reject the state, and institutional authority generally, and to expand the realm of the cooperative and the voluntary.

However, anarchism certainly does not need to be identified solely with illegalism. Any time that people are doing what they want to do voluntarily, without engaging in coercion against others, and without interference by the state or external institutions, the practice of anarchism its taking place. For example, someone who goes to church every Sunday and lives a conventional nuclear family oriented life is practicing anarchism just as much as someone that is engaged in illegal activity if that is what they wish to do. An anarchist can voluntarily choose to join a monastery or a hippie commune or a survivalist compound.

When it comes to the various schools of “formal” or “official” anarchism, any of these are compatible with the wider anarchist philosophy so long as these are voluntarily chosen. The majority of formalized, official anarchist groups are oriented towards far left politics, typically favoring  direct democracy, cooperative economics, ultra-left cultural norms, veganism, punk music, and a range of “alternative lifestyle” interests. All of this is fine in so far as it goes. However, there is also a range of authoritarian practices among formal anarchism as well. These include a fanatical adherence to political correctness (a prototype for a future secular theocracy), so-called “call out culture” (really a snitch culture that is a prototype for a future Stasi), and so-called “antifa” vigilante violence (a prototype for future death squads and secret police). Clearly, there are limitations to this particular form of anarchism. Much of this situation could be improved by means of a good dosage of the so-called “non-aggression principle” championed by libertarians, or the non-universality principle championed by national-anarchists. However, it sill remains true that such a vision offers only a very limited definition of anarchism.

An objection that will immediately be raised to this perspective will be something along the lines of “But what about hierarchy?” Many anarchists insist that any kind of anarchist community must be not only voluntary in nature, but also non-hierarchical. It is certainly true that there are communities that practice what might be called “voluntary authoritarianism” in terms of their internal structures, ranging from some religious communities to motorcycle gangs. But so what? Why should this matter so long as participation in such groups in voluntary? While voluntary non-hierarchy might be a noble ideal, it becomes self-contradictory and self-defeating to argue for “compulsory voluntary non-hierarchy.”

Interestingly, a parallel argument is sometimes made by anarcho-capitalists who insist that anarchism must be rooted in a Lockean interpretation of property rights. This position ignores the fact that property rights have been defined in a myriad of different ways throughout history by many different kinds of cultures and societies. Property rights are social constructs in the same sense as standards regarding table manners, styles of dress, religious beliefs, sexual mores, or tastes in music. Certainly, the right to personal possessions and a wide dispersal of productive property are necessary to the maintenance of individual freedom and liberty. However, this does not necessarily dictate one particular socio-economic model to the exclusion of all others.

One argument that is most commonly raised by many anarchists is than an anarchist community must necessarily be “inclusive.” Of course, this inclusiveness is subjective. Anarchists in fact demand the right to “exclude” all kinds of people and activities from their domains. Recently, for example, there was a physical confrontation between rival teams of anarchists over the issue of which books should be allowed to be distributed at an anarchist event. The fact is that all human communities are “exclusive” in some particular way. The traditional anarchist solution to this “problem” is the principle of free association. However, many anarchists have apparently abandoned this principle in favor of an ethos that might be described as “free association only for the politically correct, compulsory inclusion for everyone else” or perhaps “free association for me, but not for thee.” But the bottom line is that humans naturally practice exclusion or inclusion along the norms of their particular reference groups. Always have and always will.

Does this mean that “anything goes” as I have at times been accused of advocating? Yes, for the most part, it does. However, there may be certain problematic areas. The most obvious of these involves the possibility of organized violence between different groups, or invasion by external forces. The solution to such a problem would seem to be the formation of defensive confederations similar to the medieval leagues or the Greek cities during their war with Persia.

A second problem might be non-state communities, institutions, or organizations that engage in the use of physical coercion against their individual members, in which case they would be operating a prison or slave colony rather than a community. The infamous Jonestown community from the 1970s would be an illustration. However, communities of these kinds could certainly be subject to economic boycotts, exclusion from participation in the use of shared resources, or expulsion from wider federations of communities and organizations to which they belong. This would have the effect of raising the cost of actions of these kinds significantly.

A third consideration might be situations where there is an imbalance of material resources in a way that becomes monopolistic. The current world order is one where nearly half of the world’s resources are under the control of less 150 corporations just as most of the world’s territory is under the control of 200 nation-states. Neither a world economy dominated by a few thousand major corporations and a few dozen elite banks nor local communities dominated by local plutocrats on the model of traditional “company towns” could be said to be very anarchistic. With all due respect to my right-libertarian friends, 21st century capitalism is in reality an industrialized, high-tech feudalism. Therefore, all efforts to promote and achieve economic decentralization should be applauded, from opposition to central banking and corporate welfare, to efforts by indigenous people to reclaim their historic lands, to general  strikes, to cooperatives and communes, to the grey market and black market economies. However, it is not necessary to approach these ideas in a dogmatic or fanatical way.

The principal weakness of anarchist movements at the present time is their small size. However, these movements contain within themselves various self-limiting features that are barriers to growth. A more open-ended approach to the philosophy might have the effect of breaking down these barriers. 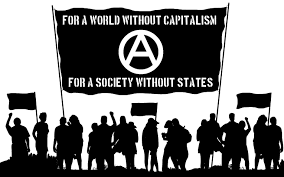