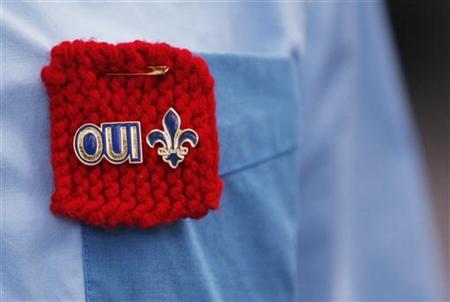 (Reuters) – Less than two decades ago, in perhaps the most traumatic moment in modern Canadian history, the predominantly French-speaking province of Quebec came within a hair’s breadth of voting for independence.

And while another vote may still be years away separatist sentiment is back on the agenda as an opposition party, dedicated to carving Canada into two, heads for victory in the September 4 provincial election.

The Parti Quebecois (PQ) complains that Quebec does not make enough from rich reserves of iron, zinc, nickel, copper and gold and wants to force mining firms to pay higher royalties. It also plans to make it harder for foreign firms to take over Quebec companies.

It will strengthen already tough language laws to ensure French dominates, and promises a third referendum on splitting off from Canada when the time is right.

“Time is playing against Canada in the sense that slowly but surely the attachment Quebecers have for Canada is withering,” said PQ legislator Stephane Bergeron, 47, tipped as a likely minister in a future PQ government.