The Anarchist and Fascist Overlap

I gave a talk a few years ago where I explored this question a bit. You can take any idea anyone ever had and find someone somewhere who put an “anarcho-” in front of it. As readers probably know,  I call a lot of the left-anarchists things like anarcho-social democrats, anarcho-Democrats, anarcho-MSNBCers, anarcho-SPLCers, etc. About 20 years ago, I came across a group calling itself the “Southern Anarchist Federation” that used a Confederate Stars and Bars with a circle A logo. The thing is they weren’t a neo-confederate group. They were leftist-anarchists like the Infoshop/anti-globalization types. They just happened to be located in the South. It was controversial back then. They would probably be murdered Manson-style today. There was once a sect that called themselves “anarchist-Leninist.” The Revolutionary Socialist League was a Trotskyist group, mostly in New York, in the 70s and 80s that over time underwent a mass conversion from Trotskyism to anarchism, with an “anarcho-Leninist” stage along the continuum. I’ve come across other folks calling themselves “anarcho-Maoist.” 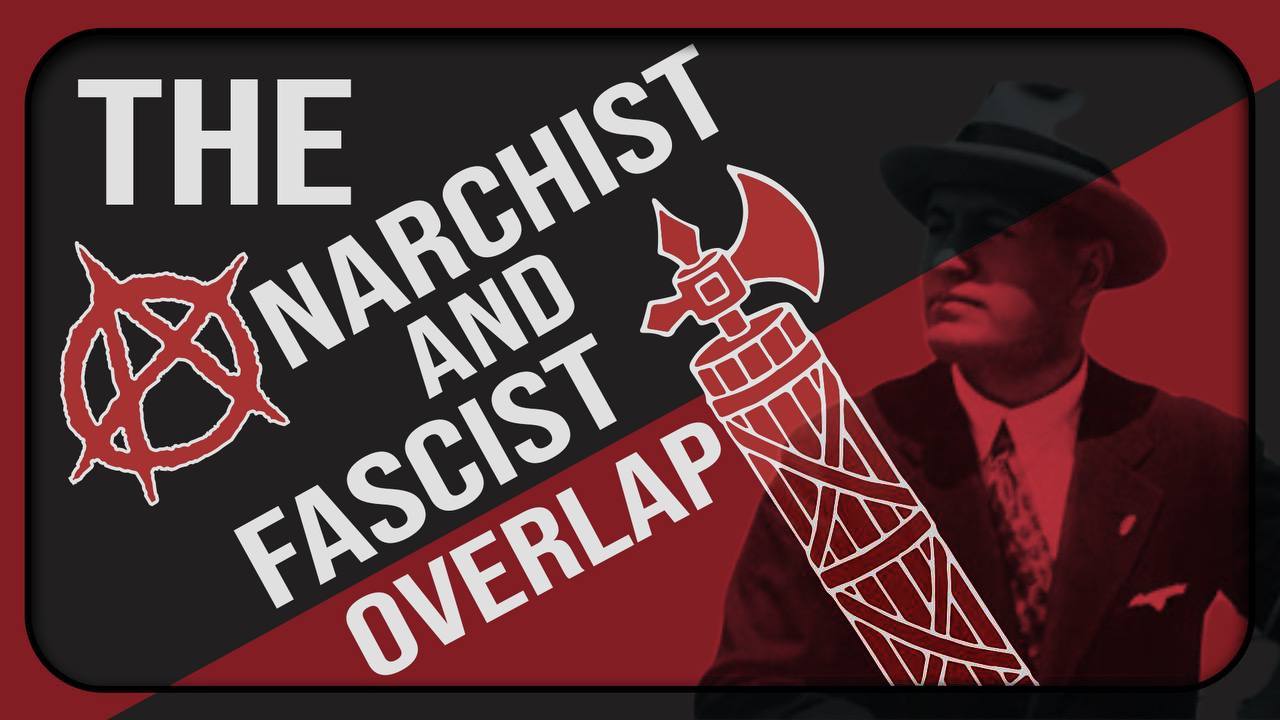 The idea of Fascism being anarchism is normally something you hear Marxist-Leninists say to discredit Fascism as liberal psychosis. It’s an easy way to discredit it, as anarchism is normally considered an incoherent joke ideology. Most may even laugh because of things like Anti-fa who’re mostly anarchists. The book Anarcho-Fascism by Jonas Nilsson is one example of such a joke with no seriousness to it. As it turns out, leaving ideological schizophrenia aside, the relationship between Fascism and Anarchism is much more complicated. Both Fascism and Anarchism technically fall into the same line of thinking. Both aim for a third position between leftism and rightism.

Moreover, Anarchism shares the same way Fascism splits itself into Nationally Organic movements that try to consolidate its own goals to arrive at a Fascist Future. Anarchism is a set of ideas that differ from each other not because their goal is different, but because of their methods and values. Just like how the Italian Fascists were different compared to the Brazilian Integralists in terms of methods and overall goals, so does Anarcho-Syndicalism differ from the ideas of Mutualist-Anarchism. They have their minds on the same end goal with a twist to their situation and views.

We must not forget that the roots of Fascism come from anarcho-syndicalist thought, and Proudhonian influence and national revolutionary organic movements and many of the ideologues and people close to Mussolini such as Nicola Bombacci or Ugo Spirito promoted policies based on anarchist ideas. The biggest misunderstanding of modern anarchist thought is to think that a Nation is the same as the rotten political State that destroys Nations themselves. The duty of every Fascist is to fight against the modern state of things, to destroy the State as a whole, and from the ashes that will remain, construct its own Fascist State where real anarchy shall arrive, not because men will be without rulers, but because men shall be the rulers and with the accumulation of power for every individual organically composing a nation, will men truly experience anarchy.