A new work out from TELOS that looks interesting. 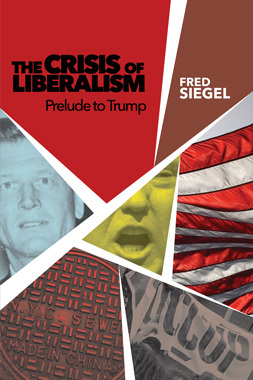 by Fred Siegel
With a Foreword by Joel KotkinAlso available in Kindle ebook format from Amazon.com.

In The Crisis of Liberalism: Prelude to Trump, Fred Siegel leverages New York City to uncover the key political conflicts and social contradictions in American liberalism over the last century. This wide-ranging collection of essays critically recounts how passionate intellectual debates and then heated cultural struggles over how to realize “the good life” in the modern city emerged from the writings of early progressive “thought leaders.” Herbert Croly and H. G. Wells once envisioned college graduates as a new elite that could pick up the project of enlightened democratic governance where the European aristocracy had failed. Yet, as Eric Hoffer observed, these graduates left top-notch schools as liberal technocrats wanting “power, lordship, and opportunities for imposing action.”

The flaws in this approach expressed themselves most floridly in John Lindsay’s New York, as his activist top-level experts and their many bottom-tier clients aligned themselves against the material aspirations and cultural values of the five boroughs’ middle social strata. Lindsay’s flashy limousine liberals were a preview of today’s politically correct gentry liberalism. Its cultural programs over the past half-century, as Siegel shows, ultimately failed the downtrodden underclass and alienated middle-class New Yorkers trapped in economic stagnation after 9/11. While Hillary Clinton and Barack Obama sparred over policy minutiae in the heated 2008 Democratic Party primaries, both candidates neglected voters’ worries, like illegal immigrants or China’s emerging threats. This misdirection of the nation’s and the city’s politics by globalist technocratic liberals became the prelude to Donald Trump’s angry nationalist demand to put “America First.”