Following months of cajoling by the White House, the Federal Reserve finally cut its benchmark interest rate. However, the reaction in equity and currency markets was not the one President Donald Trump wanted – or many traders anticipated.

The Trump administration wants the Fed to help drive the fiat U.S. dollar lower versus foreign currencies, especially those of major exporting countries.

Instead, the U.S. Dollar Index rallied throughout July ahead of the expected rate cut and continued rallying after Fed chairman Jerome Powell made it official on Wednesday.

In fact, the Federal Reserve Note broke out to its highest level since early 2017. 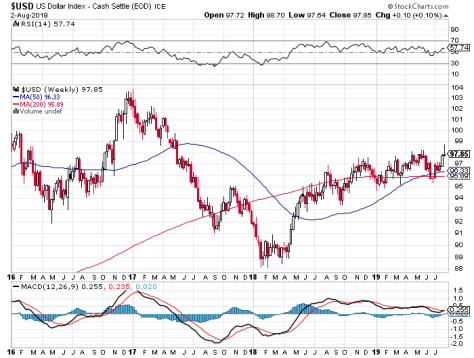 The Fed also announced it would end its balance sheet reduction program a month earlier than originally scheduled.

These dovish policy changes apparently weren’t dovish enough. The central bank could have gone for a 50-basis-point cut instead of the more routine quarter point cut it delivered. It could also have announced a new Quantitative Easing program.

In his press conference, he described the cut as “mid-cycle adjustment” that didn’t necessarily imply follow-up cuts.

As he often does, President Trump vented his displeasure via a tweet:

“What the Market wanted to hear from Jay Powell and the Federal Reserve was that this was the beginning of a lengthy and aggressive rate-cutting cycle which would keep pace with China, The European Union and other countries around the world….”

Trump is certainly correct in his observation that Europe and other regions are far outpacing of the U.S. in terms of ultra-accommodative monetary policy.

Several countries have now gone to negative interest rate policy. An estimated $13 trillion in negative-yielding bonds now sits in the accounts of holders who are apparently content with losing money at a fixed rate.

Gold and Silver Show Strength in All Currencies

The upshot is that gold and silver have recently been breaking out in terms of euros, yen, yuan, and other foreign currencies.

Precious metals have also fared quite well in terms of Federal Reserve Notes. Even though the Dollar Index rose more than 2% in July, gold managed to come out of the month with a 2% gain. Silver put on an even more impressive 7% advance.

Precious metals are rallying versus all currencies, a good harbinger of a major bull market ahead. When our currency finally turns down, the recent strength in metals could be amplified – big league.

As our centrally planned monetary system is currently set up, it’s the responsibility of the Treasury Department – not the Federal Reserve – to manage the value of the U.S. dollar versus foreign currencies.

Toward that end, the Treasury’s Exchange Stabilization Fund has the power to carry out both direct and indirect market interventions.

The idea of manipulating our currency value in foreign exchange markets has been discussed by the White House. The idea was recently rejected – at least publicly.

According to a July 26th Bloomberg story, “President Donald Trump has rejected, for now, the idea of aggressive currency intervention that could give the U.S. an edge with its trading partners by weakening the dollar.”

Treasury Steven Mnuchin apparently talked Trump out of pursuing a currency manipulation/counter-manipulation scheme. But that was before Jay Powell (who was appointed to the Fed at Mnuchin’s recommendation) came out with a policy statement that pushed the greenback to a two-year high.

Trump could be running out of patience as he fears his re-election campaign will run out of time before voters see any beneficial fruits of his trade battles.

Even if he was talked out of making currency intervention a formal policy of the administration, that doesn’t mean it won’t be carried out anyway behind the scenes, through secret Treasury department operations.

Meanwhile, the Fed is in easing mode with odds still favoring another rate cut by September. No other major central bank is looking to tighten. It’s a race to the bottom.

Regardless of whether Europe, China, Japan, or the United States “wins” by undercutting its currency more than the others, precious metals and commodities will serve as objective measures of value.

Gold, by breaking out to a multi-year high when priced in Federal Reserve Notes and continuing to advance despite its strength versus other fiat currencies, is sending an important message to investors. Namely, it is quite possible to lose real value by holding wealth in a nominally appreciating currency.

Stefan Gleason is President of Money Metals Exchange, the national precious metals company named 2015 “Dealer of the Year” in the United States by an independent global ratings group. A graduate of the University of Florida, Gleason is a seasoned business leader, investor, political strategist, and grassroots activist. Gleason has frequently appeared on national television networks such as CNN, FoxNews, and CNBC, and his writings have appeared in hundreds of publications such as the Wall Street Journal, Detroit News, Washington Times, and National Review.