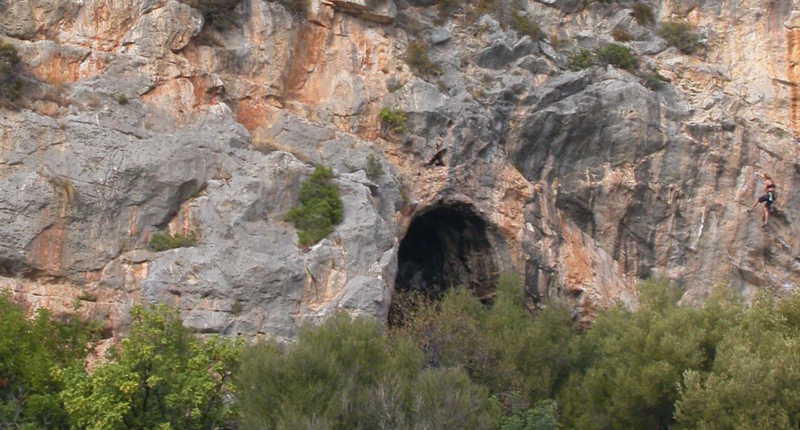 Neanderthals glued their stone tools into place on wooden handles, a new study suggests. Archaeologists found chemical traces of pine resin on 10 stone tools from Grotta del Fossellone and Grotta di Sant’Agostino, on the western coast of central Italy. That’s pretty solid evidence that Neanderthals living in Italy were hafting their stone tools and securing them in place with resin between 55,000 and 40,000 years ago—long before Homo sapiens set foot in Europe.

Getting a grip on stone tools

For around three million years, hominins had been shaping various cutting, pounding, and scraping tools out of stone, but something was still missing. Imagine trying to skin and butcher a deer using a knife with no handle, and you’ve got life for most of hominin history. Hafting tools was a major improvement.

Typically, hafting a stone tool involves fitting it into a notch or slot in a wooden handle; the tool-maker might then lash it into place with tightly wrapped sinews or plant fibers. But people also use tree resin or pitch as a glue to help hold the tool in place.

“Once softened, the resin is pliable and can be pushed into position in the haft and around the stone tool with a pointed stick,” wrote University of Pisa chemist Ilaria Degano and her colleagues. “The resin then sets again and hardens as it cools down, keeping the stone in place.” That’s how modern hunter-gatherers do it, and archaeological evidence suggests that humans—and Neanderthals—have been doing it for at least 200,000 years. In a previous study, a team of archaeologists identified the chemical signature of birch bark pitch on two stone flakes from a site in central Italy that had the bones of a young elephant nearby.

The stone tools from Grotta del Fossellone and Grotta di Sant’Agostino are about 150,000 years more recent than the two flakes from Capitello Quarry. But they’re quite significant, because they show us that Neanderthals in southern Europe were hafting their stone tools, and using adhesives to do it, more often than archaeologists had assumed so far. Previous studies have involved archaeologists practicing their butchery skills with stone tools, and those suggested that Paleolithic hunters would have had no need to haft their tools to get the job done. It now appears likely that the Neanderthals did not read that particular study.

Held together with resin and beeswax

We don’t have a lot of direct evidence of hafted stone tools, because wooden handles and sinew lashings tend to decay pretty quickly unless something really unusual happens. For example, a 5,300-year-old mountaineer now known as Ötzi carried hafted weapons, complete with lashings and adhesive to hold the blades in place. Thanks to the deep freeze of a glacier, those tools were found intact alongside his corpse in 1993. Burial in a peat bog can also do the trick. But so far, archaeologists haven’t gotten lucky enough to find well-preserved hafted tools dating back to the reign of the Neanderthals.