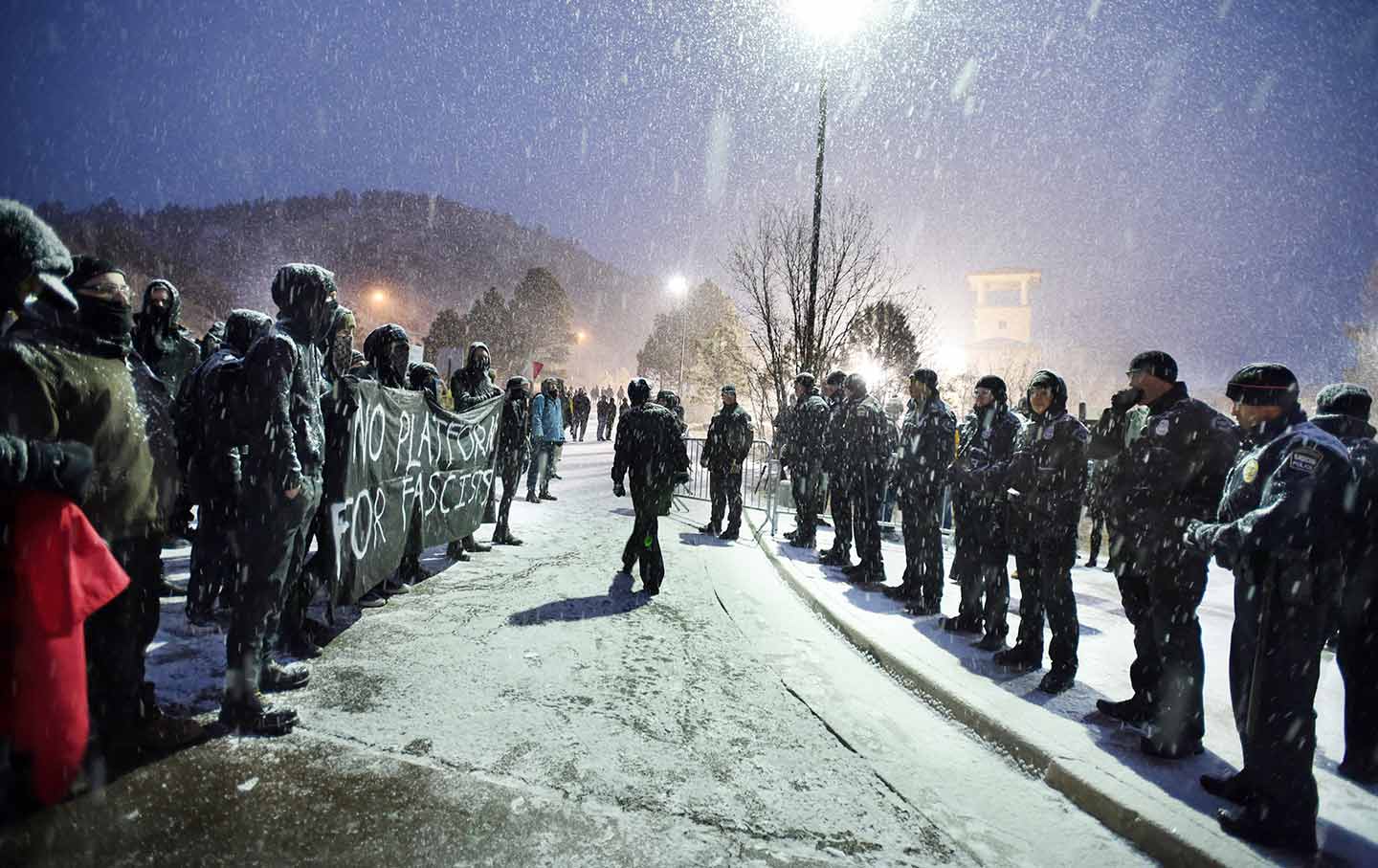 Police officers in riot gear line up across from anti–Milo Yiannopoulos protesters at UCCS in Colorado Springs, on January 26, 2017. (Jerilee Bennett / The Gazette via AP)

A decade ago, when David Armitage began working on his new book, Civil Wars: A History in Ideas, published this week by Knopf, he had no idea how relevant the subject would become. These days, it’s hard to avoid concluding that American society is tearing itself apart. Several observations and arguments in the book can be harrowing to read—that the nations mostly likely to devolve into civil wars are those that have suffered such conflicts before; that civil wars are most likely when the government is divided against itself; that politics is civil war by other means. Civil Wars ranges over more than two millennia of history, law, and philosophy, but it feels as urgent as the latest shock, as fresh as tomorrow’s news.

I recently spoke with Armitage about his book. The conversation has been lightly edited.

You write in the book that you began working on it after you “found the past rhyming with the present.” What were some of those rhymes that you saw, and what questions were you trying to answer?

I was on academic leave in that period when the Second Gulf War was at the height of its violence, around December 2006 and early 2007. I was in residence during that period at Huntington Library in Southern California, which holds the papers of Francis Lieber, whose name was popping up in the media discussion about Iraq around the same time. Even though he was a 19th-century Prussian, he became newly relevant because he produced the first codification of laws of war and debates about treatment of enemy combatants, subjects very much at issue at the time I was encountering his work.

Among his papers at the Huntington Library was correspondence with his boss, Henry Hallek, a Union general, about the code and, in particular, about the absence of discussion of civil war in it—a strange omission for a code of the laws of war in the midst of the what became known as the US Civil War. There was no legal definition available to him, so he had to describe and define civil war in legal terms that exactly coincided with highly ideological debates in the media and in Congress about whether or not the violence in Iraq should be considered a civil war, or instead a rebellion or an insurgency or an insurrection. As I was reading this mid-19th-century correspondence I was hearing in the news and in the papers about how hard it still was to define a civil war. That’s one of those moments when, as Mark Twain said, history rhymes. I realized that these were two data points—one from the 1860s, and one from the 2000s—which were part of a longer history of civil war that needed reconstructing.

This book is a story of paradox, from the first page to the last. Can you explain why the very idea of “civil war,” beginning with the Romans, is a bundle of contradiction?