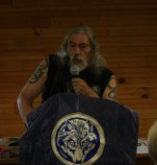 Keith Preston interviews musician and former activist Robert N. Taylor on Taylor’s vivid experiences with the revolutionary, anti-communist, Minutemen organization of the ’60s and ’70s, and his later work with the folk band Changes.

Robert N. Taylor has played an active and influential role on the outsider Right for decades. In the 1960s, he was closely involved with The Minutemen, a grassroots anti-communist group headed by Robert Bolivar DePugh. Due to a variety of factors, including pressure from the FBI and other organizations, the paramilitary group widely known for its “Traitors Beware!” stickers eventually disbanded; but a template for many future militia groups had been formed. After leaving The Minutemen, Taylor turned to other interests and founded the first incarnation of his folk band Changes with cousin Nicholas Tesluk. In the ’70s, Taylor helped pioneer the growing Odinist/Ásatrú movement and remains involved with various organizations. In the late ’90s, Michael Moynihan—an editor of the radical traditionalist journal TyrTYR—rediscovered Changes and worked to release old and new material by the duo. Taylor continues to record and tour.