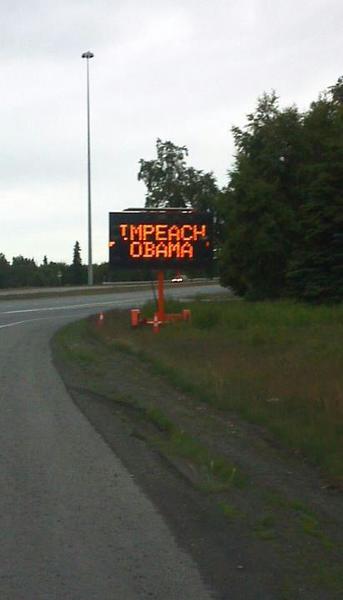 Tamara Douglas snapped a picture of the sign message around 6 a.m. Thursday.

Several electronic road construction signs around Anchorage were hacked late Wednesday night or early Thursday morning, according to the state Department of Transportation.

Signs that normally display closure and detour information, like the one on Minnesota Drive near 100th Avenue, were changed to read “Impeach Obama.” That particular sign wasn’t fixed until sometime between 6 a.m. and 8 a.m. Thursday.

It happened because DOT says it doesn’t lock the boxes on the signs that hold the message control pad.

Construction managers say sign-hacking has never happened before, so they never thought to lock the boxes.

DOT says that changed this morning, and now all of them will be locked.