Think of it as an Afrikaner-bolo.

An elderly couple stuck with an unfinished home are helped by the community in Orania.

These might make for some interesting locations for crowd-funded intentional communities.

As far as social distancing goes, it doesn’t get much better than moving to your own private town. From picture-postcard Swedish villages to American ghost towns frozen in time, these unique settlements are the ultimate real estate opportunities.

Fancy taking on the title of mayor? Let’s look around the towns and villages on the market right now.

Shane Burley is no more an unbiased reporter on CHAZ than Tucker Carlson. But it’s interesting to get a range of perspectives.

END_OF_DOCUMENT_TOKEN_TO_BE_REPLACED

They’re doing this with the acquiescence of the Mexican President, just as CHAZ is existing with the apparent acquiescence of local and state governments of Seattle and Washington, which raises some interesting questions about anarchist strategy.

The Zapatistas are on the move in Chiapas, extending their control into another 11 areas of the state.

The Zapatista Army of National Liberation (EZLN) announced in a statement on the weekend it will create 11 new caracoles, or autonomous zones, in the southern state.

END_OF_DOCUMENT_TOKEN_TO_BE_REPLACED

If these FOX News reactionaries were as “anti-establishment” or “anti-big government” as they pretend they would be creating “autonomous zones” of their own. What a shame they’re really just mouthpieces for the right-wing of the ruling class.

If only it were true.

Roadblocks, checkpoints, barricades, armed vigilantes: Anyone with a functioning brain knows this is unacceptable.

Indeed it is. But not in the way that Carlson means. This is hilarious. During the heydey of the militia movement of the 1990s, there were “freemen” and “sovereign citizen” groups that did stuff like this.

Looking at the daily news these past couples of weeks one may have the pessimistic
opinion that what was left of liberty will soon be gone. Even before the recent riots, which has President Trump and his GOP goons threatening the US people with the use of military force at home, CoronaVirus hysteria shutdown the US economy. This has led to financial ruin for many Americans who could not work or operate their businesses, and also the power of their dollars being crippled due to constant printing of unbacked money by the Federal Reserve along with the illogical and contradictory stimulus checks.

END_OF_DOCUMENT_TOKEN_TO_BE_REPLACED

Welcome to the CHAZ, the newly named Capitol Hill Autonomous Zone, where most everything was free Tuesday.

END_OF_DOCUMENT_TOKEN_TO_BE_REPLACED

Police have retreated from Seattle’s East Precinct and protesters have established an autonomous zone in the neighborhood. Following Monday’s retreat of police and national guard, protesters have begun erecting barricades after a week-long blockade of the East Precinct.

Read more about it at Capitol Hill Seattle Blog.

END_OF_DOCUMENT_TOKEN_TO_BE_REPLACED

I am sometimes asked how I, as a radical-anarchist-extremist, can have a parallel interest in conservative or right-wing thought. But I simply utilize “conservative thought” as a supplemental means of correcting the limitations of “radical thought.” Here is an illustration:

A correspondent offers what is essentially a Burkean conservative critique of the insurrection. We should remember that revolutions typically produce nothing more than new tyrants. See Robespierre, Napoleon, Lenin, Stalin, Mussolini, Hitler, Mao, Kim, Pol Pot, Saddam, Khomeini, etc. The exception is when an alternative infrastructure is already in place that is able to both depose the former system and while safeguarding against the erection of a new tyranny.

END_OF_DOCUMENT_TOKEN_TO_BE_REPLACED

What is an Exitarian? Discussing exiting “anarchist politics”, opening up a free market of governance, and implementing it in the real world in an actual framework of different kinds of free, decentralized communities.

Take a look at 3 of Ulex’s leaders discussing the technology, law, business and philosophy of Ulex and Holochain! Tom W. Bell teaches law at Chapman University, and is the founder of Ulex! Learn about how law doesn’t have to come from government, and what you can do to make it so. Philip Saunders is a veteran of the Ethereum smart contract space, and is one of the largest contributors to the Ulex open-source development project. Matthew Schutte is an avid surfer and director of communications at Holo – the next stage in decentralized ecosystems that transcend blockchain.

The CEO of the Startup Societies Foundation, Joseph McKinney, outlines that a new world is possible in the depths of these turbulent times. He discusses on Startup Societies can help build new institutions in a Post Covid World.

Since plenty of Americans, left and right, still seem to be hung up on the Civil War and its legacy, perhaps the following Wikipedia description of the early individualist-anarchist Lysander Spooner’s position on the Civil War would be helpful, i.e. support for the abolition of slavery with parallel support for abolishing the federal union. This issue is one of many where “anarchists” fail to embrace their own history and heritage and simply adopt the default “progressive” narrative. Despite their claims of edginess, most of them are very much the product of the governmental, educational, cultural, and media environment from whence they came.

END_OF_DOCUMENT_TOKEN_TO_BE_REPLACED

This article is an excellent demonstration of why the “anarcho-left” fails. Not everything said in this is “wrong,” and not every point being made is worthless, but it’s mostly just the standard mainstream “progressive” narrative with an anarchistic gloss. Most telling of all is that there is no mention of the Empire and imperialism in this. None. Zero. As if such a thing does not even exist. Talk about “privilege.”

I would agree that mere territorial secession alone, while a step in the right direction, is hardly sufficient, and certainly not the same thing as anarchism per se. Instead, territorial secession should merely be an aspect of an “all-fronts” resistance strategy that involves the proliferation of an infinite number of anarchic communities.

It’s interesting that the article contains this passage: “The creation of new states in North America would expand the harms done by authority. It would likely involve majority-white legislatures drawing hard borders across the lands of indigenous people and the routes of migrants. “ Then later in the article, this passage appears.

END_OF_DOCUMENT_TOKEN_TO_BE_REPLACED

The ATS masthead contains the slogan “Pan-Anarchism Against, Pan-Secessionism Against the Empire” which is merely an expression of a very simple concept, and which is predictably misunderstood by many people (because many people are dumbasses).

END_OF_DOCUMENT_TOKEN_TO_BE_REPLACED

In recent times, I have seen a number of commentators calling for one or another kind of left/right hybrid populism. Some years ago, Ralph Nader was pushing this idea (obviously unsuccessfully). More recently, Krystal Ball (social democrat) and Saager Enjeti (economic nationalist) of The Hill’s Rising have promoted a similar concept, i.e. uniting left and right populists around class issues. Bill Lind (paleoconservative) has called for a culturally right/economic left populism (which is more or less what many of the “right-wing populist” parties of Europe are). Even Tucker Carlson has expressed leanings in this direction at times.

END_OF_DOCUMENT_TOKEN_TO_BE_REPLACED

In the past, I have thought that the strategically “ideal” situation partisanship-wise would be to have a Republican presidency, Senate, and Supreme Court, a Democratic House (in order to ensure divisiveness at the federal level), and as many Democratic administrations as possible in heavily populated states and large cities. That’s more or less the situation we have now and it seems to be playing out well. Liberals tend to like the federal government and distrust state and local governments (too many icky “reactionary” folks) and conservatives tend to like states’ rights and distrust the federal government (because it’s supposedly run by “leftists”). But a supposed “fascist” presidential administration has the effect of alienating liberal and left opinion from the feds, and supposedly “leftist” state and local governments have the effect of alienating conservatives in rural counties, secondary cities, and suburban areas.

As I have said many times, I prefer to boycott elections, and for those who prefer voting, I suggest voting for the minor parties. But if you prefer to vote for the major parties, I generally recommend voting for Republicans at the national level (except for the House, as we’ve got to keep that divisiveness rolling) and for Democrats at the state and local level.

Some White House advisors like Anthony Fauci have often acted as if they were in a position to dictate to states whether or not to mandate “social distancing.” But neither the president nor his advisors have ever demonstrated that they actually have the legal authority to set state and local policies on these matters.

Indeed, Donald Trump appeared to quite clearly defer to states on these matters since the COVID-19 panic began in March.

Oddly, the president reversed himself on deference to states earlier this week, and has begun claiming the authority to set policies on forced economic shutdowns for all states. The claim came in response to efforts by state governors who seek to set their own timelines and methods for eliminating social distancing orders and other forced shutdowns of local businesses and enterprises.

Specifically, New York is leading a coalition of several states including Massachusetts, Rhode Island, New Jersey, Connecticut, and Pennsylvania in “coordinating” a scaling back of the economy-paralyzing orders. California is leading a similar pact among West Coast states.

Apparently not inclined to allow these states to act on their own, Trump at an April 13 press conference insisted that he will decide when states scale back social distancing orders and declared, “when someone is president of the United States, the authority is total.”

It’s not unusual for presidents to insist they can do whatever they want, whether publicly or privately.

What is unusual now is the way left-wing politicians and media organizations have reacted.

When historians look back at “the coronavirus crisis of 2020,” they’re likely to focus on the spread of the disease, the economic dislocation it caused and how the federal government responded to it. Predictably, and depending on the depth and duration of the dislocation, the current moment will be labeled as either the “end of an era” or the beginning of a new one.

But at some point in the future, you can be sure, more nuanced thinkers will likely adjudge our current crisis as a piece with those that preceded it: of how, when it comes to American history, the more things change the more they actually stay the same.

This was vividly displayed over the last two weeks, as a gaggle of state governors complained that the federal government had failed to provide a unified, coordinated and national response to the crisis. “It’s the wild west out there,” Illinois Governor J.B. Pritzker said, while a second group pushed back against federal guidelines on what policies they should adopt in dealing with Covid-19–with a chorus of southern states leading the way.

First among them was Alabama, where, on March 26, Governor Kay Ivey dismissed the idea of a statewide stay-at-home order, emphasizing Alabama’s uniqueness, while channeling Lost Cause notions that the Enlightenment was hatched somewhere near Montgomery. “Y’all,” Ivey pronounced, in an unmistakable drawl, “we are not Louisiana, we are not New York state, we are not California.”

This is how it’s done. Listen here.

Joe McKinney, founder and CEO of the Startup Societies Foundation, discusses the array of models and possibilities for “startup societies,” whereby new or existing communities establish arrangements in which the hand of the state is felt more lightly. 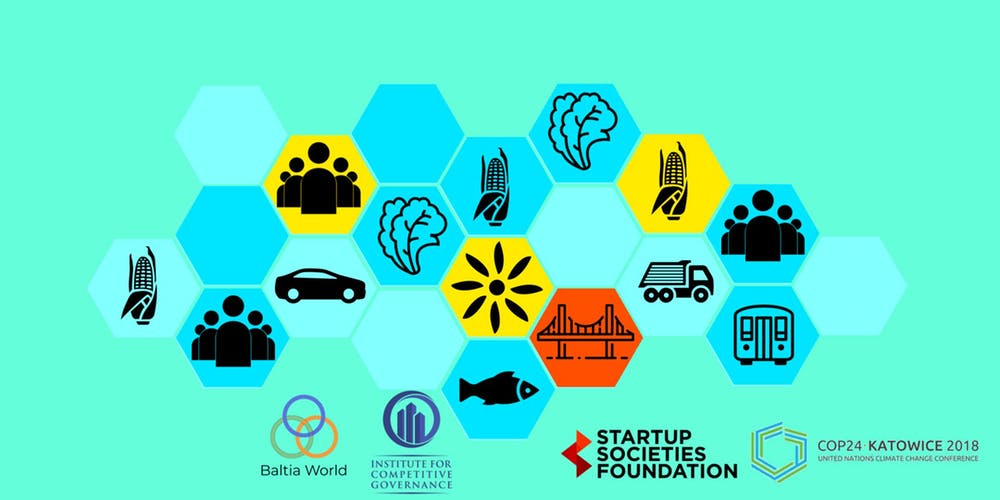 A general strike could potentially be a core component of the economic aspect of pan-secessionism.