That’s quite an accomplishment. While FOX is a cesspool of Know-Nothing, MSNBC is arguably worse because it constantly beats the drums for greater hostility between the USA and nuclear-armed Russia. FOX is usually content to merely attack any state that Israel and Saudi Arabia don’t like.

Krystal Ball and Saagar Enjeti break down a recent report that ranks MSNBC as the most partisan broadcast news organization on cable, outpacing Fox News.

Krystal Ball and Saagar Enjeti react to the controversial statements President Trump made at a rally in Las Vegas, NV advocating for extrajudicial killings, specifically referring to Michael Forest Reinoehl, who was fatally shot by US Marshals during his arrest.

The rage about corona and its consequences has evidently elicited a mental disturbance with global reach. Every insanity has now become acceptable—on the condition that the insanity claims to be of the “left,” i.e., anti-fascist, anti-racist, anti-capitalist, etc. Whoever wants to keep it at a distance will be silenced. This has come to be called “cancel culture.” While the loudspeakers still boom about the political correctness of variety, diversity, and multiculturalism, we are living in fact in a radically illiberal period that no longer permits discussions. Germany has become incapable of debates—this is the result of the fanatic moralization of all life questions.

END_OF_DOCUMENT_TOKEN_TO_BE_REPLACED

The problem with “systemic racism” analysis of this kind is that, while not factually wrong on its face, no context is provided. The assumption is that the present system would be fine if only it were less racist, which has the effect of obscuring and obfuscating critiques of “systemic capitalism” or “systemic statism.” Actually, the current system would still suck out the ass even if it were 100% non-racist. Economic policies that are intended to create more poor people will inevitably produce more poor black and brown people, who will be more likely to form oppositional cultures and come under attack from the state.

State policies that create more criminal laws will inevitably produce more poor black and brown people who run afoul of the law (and more people of all races, classes, and cultures who are attacked by the state as well). Progressives and liberals cannot have their cake and eat it too. They cannot have less systemic racism involving poor minorities and have gun control, drug prohibition, laws against selling loose cigarettes, gambling and prostitution prohibition, stringent regulations of self-employment activities like hair braiding and nail-polishing, truancy laws, a huge range of traffic offenses, housing policies that create homelessness, etc., etc., etc.

END_OF_DOCUMENT_TOKEN_TO_BE_REPLACED

“The most interesting political questions throughout history have been whether or not humans will be ruled or free, whether they will be responsible for their actions as individuals or left irresponsible as members of society, and whether they can live in peace by volitional agreements alone.”

Solidarity is a bitch when everyone who can afford a knife is slitting each other’s throat. That’s the nasty little limerick that keeps playing on repeat in my skull like a mantra as populist grassroots uprisings devolve into bitter proxy wars between roaming tribes of bitter proles, killing each other over which oligarch’s name they have scrawled across their battle flags. Everyone wants to pick sides. Everyone is trolling for convenient scapegoats. I just see poor people killing poor people while two sick rich candidates arrange their corpses into clever platforms to stand on and promote more war from. The splintering of the George Floyd Uprisings into partisan turf warfare doesn’t just rip up my already bleeding heart because I had so much hope for the revolutionary potential now being squandered. It kills me because I have people on both sides of these gorey shenanigans and they should both be on the same damn team. All poor people should be, regardless of race or even politics.

END_OF_DOCUMENT_TOKEN_TO_BE_REPLACED

Four police departments in parts of Oregon ravaged by wildfires — propelled by high winds across parched land during hot, dry weather in a changing climate — are pleading with the public to stop calling 911 to pass on unfounded rumors that antifascist political activists have intentionally set the blazes.

The false claims have been spread on social networks by supporters of President Donald Trump, who has spent months pretending that antifascists in the Pacific Northwest dedicated to confronting white supremacists are members of an imaginary army of domestic terrorists called Antifa.

Primed by that fear-mongering, the president’s supporters have fallen hard for internet hoaxes falsely claiming that antifascist arsonists have been caught in the act.

Keith interviews Attack The System co-editor Vince about Portland Oregon’s 100 plus nights of protest. Vince lives in Portland and provides first hand accounts and context for the uprising

END_OF_DOCUMENT_TOKEN_TO_BE_REPLACED

Every indication points towards this being a fake revolution. First, this revolution *is* televised, and gets favorable press coverage, with the embarrassing parts downplayed or ignored. Then, the corporations get on board, emblazoning the revolutionary slogan on their commodities. Half of the ruling duopoly has shown support, even kneeling in allegiance to the revolution. Their mayors have let rioters do as they please, and district attorneys have released arrested suspects. The reigning power structure of academia has indoctrinated the youth for decades to lay the foundation for this revolution, and the entertainment industry has primed the popular culture for this moment. It looks like the-powers-that-be are actively enabling this putative revolution because it furthers their agenda, and the people on the streets are being used as expendable pawns in someone else’s master plan.

I would add to these observations the fact that a de facto alliance extending from the far-left to neocons has formed merely for the purpose of opposing Trump, who is simply a loose cannon within the ruling class and who has capitulated to or been overruled by the normal Republicans or Deep State on virtually every issue, and whose fans represent a political/cultural minority that is shrinking in size and losing power.

END_OF_DOCUMENT_TOKEN_TO_BE_REPLACED

Jessica Krug, the white professor at George Washington University (GWU) who admitted to pretending to be Black throughout her adult life, has resigned from her position.

In a tweet from GWU on Wednesday, the school announced that Krug’s resignation was “effective immediately” and that her classes this fall semester “will be taught by other faculty members.”

“Students in those courses will receive additional information this week,” the Washington, D.C. university noted in the announcement.

Krug could not be reached by PEOPLE for comment.

So FOX is posing as the antiwar channel now? Except for when the beneficiaries are Israel and Saudi Arabia, of course.

What I find most interesting about this piece is how it illustrates that the various factions of the “Left” and “Right,” broadly defined, not only have different philosophies and political preferences but different realities as well. Can people who have totally different ideas on what reality even is co-exist in the same society? I tend to think not.

The Left is wrong, but it is not stupid.  If we are to defeat it, we must study and understand its tactics.  Three are of special importance.

END_OF_DOCUMENT_TOKEN_TO_BE_REPLACED 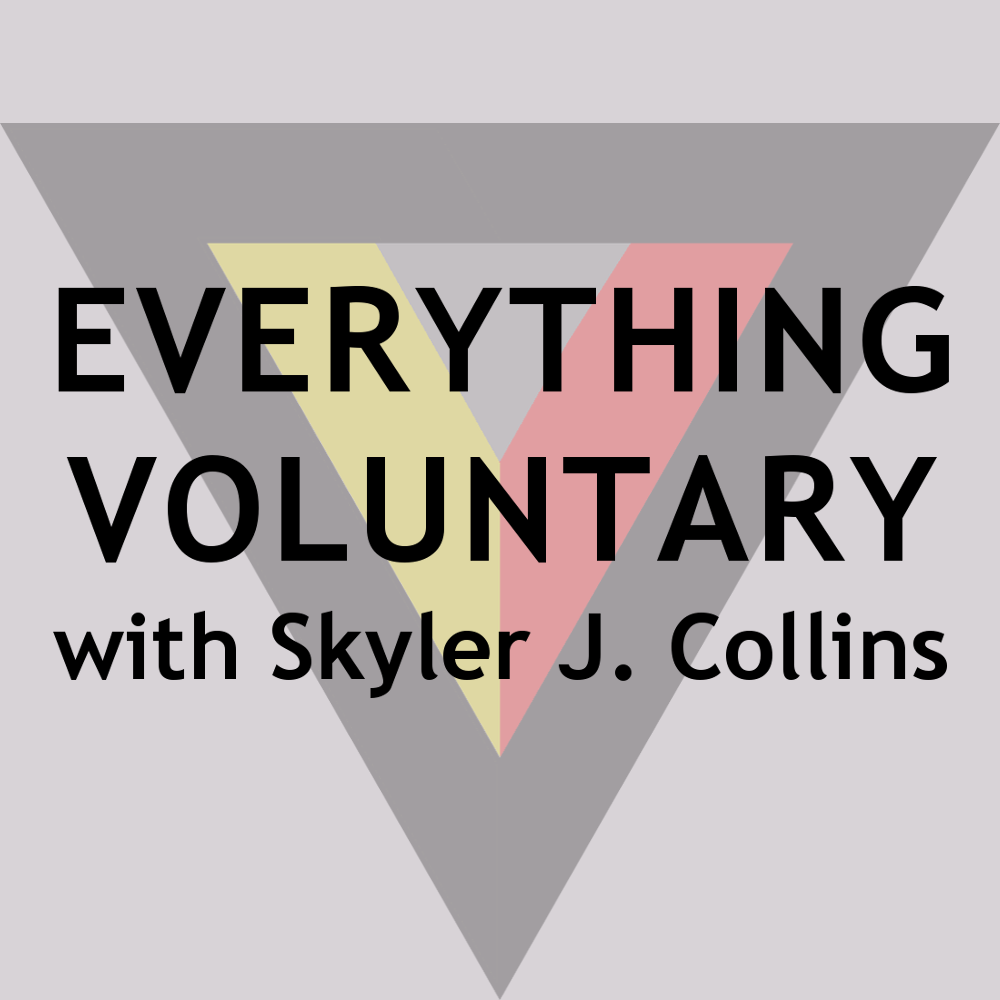 Episode 368 welcomes back Ian Mayes to have a chat with Skyler on the following topics: working in the neighborhood where George Floyd was killed; his experience with the Minneapolis protests and riots; Kyle Rittenhouse; lockdown created tinderbox across the country and world; Minneapolis “defund the police” campaign; lack of real anti-authoritarian sentiment; political coalition building and guilt by association; civil wars and anarchists; Portland neighborhood “wake up” protests (Reason interview); voluntaryist welfare actions, ie. silver linings; restorative justice systems (Kibbe interview); and more.

Founder and editor of Everything-Voluntary.com and UnschoolingDads.com, Skyler is a husband and unschooling father of three beautiful children. His writings include the column series “One Voluntaryist’s Perspective” and “One Improved Unit,” and blog series “Two Cents“. Skyler also wrote the books No Hitting! and Toward a Free Society, and edited the books Everything Voluntary and Unschooling Dads. You can hear Skyler chatting away on his podcasts, Everything Voluntary and Thinking & Doing.

It would certainly seem that way.

In an ideal situation, right-wing vigilantes would provide protection to residential neighborhoods, mom and pop shops, and the general public, while left-wing vigilantes burned down police stations and the lumpenproletariat looted Wal-Mart. But I’ve noticed that many situations tend to be less than ideal.

END_OF_DOCUMENT_TOKEN_TO_BE_REPLACED

All of this intra-ruling class intrigue is hilarious. It reminds me of the Medici of the Italian Renaissance era, although the Medici were classier and more stylish.

A heel vs heel match brewing. I have no problem with Portland being a far-left micronation.

My respect for Trump would increase significantly if this story were true, but I suspect it’s probably just neocon/deep state/kept media-generated propaganda. I hope I’m wrong. Trump is a scumbag but the neocons are even bigger scumbags.

Most of the violence has probably been instigated by Antifa, right-wing extremists, ordinary criminals, sports rioter-types, and cops. But the real problem is not that too many police stations have burned but too few.

The vast majority of Black Lives Matter protests—more than 93%—have been peaceful, according to a new report published Thursday by a nonprofit that researches political violence and protests across the world.