A good documentary on Nietzsche. The primary weakness that is demonstrated by most anarchists and leftists is their failure to confront Nietzsche’s critique of modern liberal-humanism generally and leftism specifically as forms of secularized theocratic neo-Abrahamism, which is why we find so much zeal among leftists for rooting out heretics and the morally impure while destroying relics of the “pagan” past.

END_OF_DOCUMENT_TOKEN_TO_BE_REPLACED

I can’t believe this article actually appeared on the Psychology Today website.

This past academic year we have seen a number of examples of political correctness “gone mad” on college campuses. We have seen many conservative speakers having to cancel their talks, we have seen Ivy League students becoming hysterical about some benign comments about Halloween costumes, and we have seen Emory students freaking out and protesting to the university president because someone scrawled Trump 2016 in chalk on the campus grounds.

As a psychologist who has a long standing record of concern about patriarchy, racism and social justice issues, I certainly am not someone who dismisses “political correctness” in its entirety. We should indeed be attentive to issues of power and privilege approach these issues with reflection. However, over the past decade, I have found myself increasingly concerned with political correctness evolving into an oppressive righteousness that are in many ways deeply misguided and incomplete and there is definitely a need to push back against it when it spills over into absurdity. 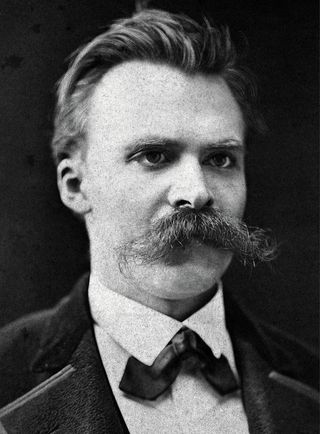 I recently (re)discovered a wonderful frame that allowed me to crisply state what is wrong with modern academic leftist “political correctness” from none other than the eminent philosopher Fredrick Nietzsche. I was reintroduced to these ideas in the context of a course I was taking on Existentialism. After detailed study of many cultures, historical contexts, and various philosophies, Nietzsche articulated the view that there are two broad moral views or moral frames of mind, that of master morality and of slave morality. Slave morality is concerned with issues of justice, fairness and protection of the weak. It is called slave morality because its emphasis and focus is on those who are powerless, controlled or in positions of minority. From my unified perspective, especially that of the Influence Matrix (see below), slave morality can really be thought of as “horizontal”, red line, or affiliative-love morality. The emphasis is on placed on equality, sensitivity and connection. 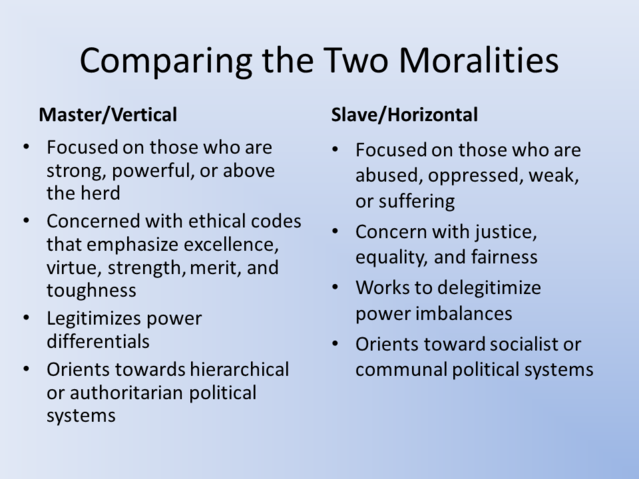 Right now, I’m having an enjoyable time reading through my years-long-neglected hardcover copy of Without Guilt and Justice: From Decidophobia to Autonomy, a relatively obscure work by prominent Fritz-translator Walter Kaufmann. I’m thinking about dedicating a post or two to this work, which could be read as Kaufmann’s culmination of the Nietzschean project, but for now, I’m just gonna share a few illuminating passages on “equal opportunities” with you…