Whatever else could be said about Trump, he’s definitely a businessman who does his market research. 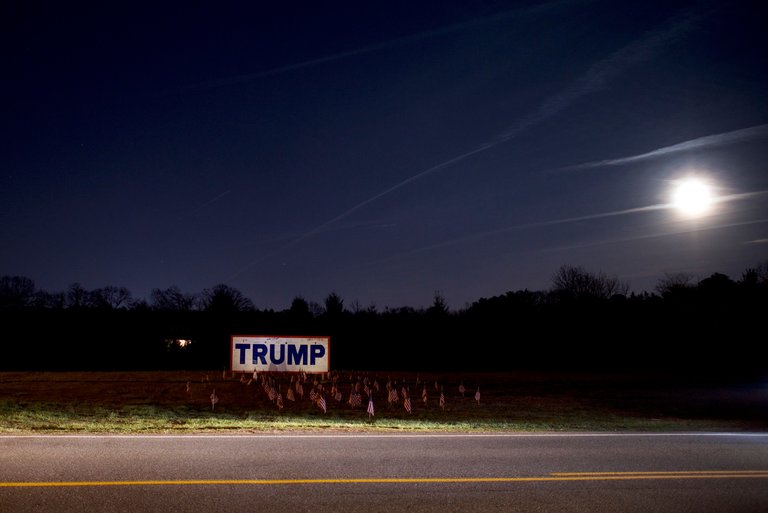 Donald Trump has dominated polling among Republicans for the better part of a year, as he has delighted in reminding people. But there’s one poll that you probably haven’t heard about and that he doesn’t talk about.

Activists and leaders in the social conservative movement, after spending most of the past year opposing and condemning Donald J. Trump, are now moving to embrace his candidacy and are joining the growing number of mainstream Republicans who appear ready to coalesce around the party’s presumptive nominee.

Though their support for Mr. Trump is often qualified, this change of heart is one of the more remarkable turns in an erratic and precedent-defying Republican campaign. It reflects the sense among many Republicans that, flawed as they may see him, the thrice-married billionaire is preferable to the alternative.

“Oh, my, it’s difficult,” said Penny Nance, the president of Concerned Women for America, a group that has openly campaigned against Mr. Trump. “He’s not my first choice. He’s not my second choice,” she added. “But any concerns I have about him pale in contrast to Hillary Clinton.”

“Sex Trafficking of Americans: The Girls Next Door.”

Conduct a Google news search for the word trafficking in 2015 and you’ll find pages of stories about the commercial sex trade, in which hundreds of thousands of U.S. women and children are supposedly trapped by coercion or force.

At first blush, the anti-political correctness crusaders that make up Donald Trump’s online army have little in common with the so-called “social justice warriors” they claim to abhor. Some will even argue that trigger-warning-happy, intolerance-intolerant campus activists and their digital counterparts are actually driving otherwise level-headed and mild-mannered young folk straight into the arms of the Donald. But as well as these two millennial cohorts work as political foils on the surface, they’re really better understood as two sides of the same authoritarian coin.

The media coverage of Superstorm Sandy was 24/7. However, there was little mention of climate change. Why is this? And why didn’t Obama or Romney mention climate change at all in the three TV debates despite a summer of record temperatures, historic drought and wildfires in the US? Why are so many people in the US in denial of this dire situation? And is the thermometer going up or down? CrossTalking with Patrick Michaels, Denis Rancourt and Richard Milne.

Climate change is an urgent topic of discussion among politicians, journalists and celebrities…but what do scientists say about climate change? Does the data validate those who say humans are causing the earth to catastrophically warm? Richard Lindzen, an MIT atmospheric physicist and one of the world’s leading climatologists, summarizes the science behind climate change.

Libertarians who feel the need to tear down American culture and values are not striking a blow to the state, but forging their own chains. Be a non-conformist, but leave everyone else alone. They will conform to the idea of leaving everyone else alone when we claim victory.

You can regulate society on a voluntary basis, with culture, tradition, and honor for your ancestors guiding your actions.
-Or-
You can have an ever increasing government.
You can pick only one.
—
Libertarians are the smartest people in the room, and perpetually ahead of their time. Unfortunately, they live in this bubble, clueless as to how the majority of people think.
READ MORE

Straight from the front lines of the war on drugs, former undercover narc and current LEAP speaker Jack Cole tells an international conference why we need to legalize and regulate all drugs.

Hear directly from a retired judge who has done a full 180 on the War on Drugs.

A debate between Walter Block and Robert Wenzel hosted by Tom Woods. I found myself generally agreeing with Wenzel in this. Listen here.

When libertarian scholar Walter Block announced the creation of Libertarians for Trump, he generated a good deal of controversy. Now he explains his support for Donald Trump’s campaign for the Republican presidential nomination — in the context of a debate with Robert Wenzel. Enjoy!

Walter Block holds an endowed chair in economics at Loyola University New Orleans. He is the author of many books, including Defending the Undefendable, and nearly 500 peer-reviewed articles.

Robert Wenzel is the creator, editor and publisher of EconomicPolicyJournal.com

The crack in the PC Coalition gets wider. This is awesome!

Hopefully, the party conventions this summer will resemble Chicago 1968. Street fighting between Clintonistas and BLM, and between Trumpians and Neocons, would be beyond awesome.

Over at the Inferno: my latest love letter to the kind of “peacekeepers” nobody needs.

Ostensibly formed as a global peacekeeping organisation in the wake of World War II, the United Nations, or U.N., has, over time, made it clear that the peace it means to impose on the world resembles the pax Romana (or pax Islama), mandated and managed by way of a top-down global hegemon.

For all the criticisms levelled at desert pirates Daesh, their M.O. seems to resemble the U.N.’s in several key ways, with its fatwa-friendliness, universalist aspredations*, and a heralded, hypocritical hard-on for pious prohibition and penile predation. If one didn’t know any better, it’d be easy to suspect the Muslim Männerbund of taking more than a few notes.

When conservatives or libertarians point out that lowering tax rates increases revenue, liberals scoff. You can show them proof, and they won’t listen because they are too vested in their ideology to slow down and accept that sometimes things work a little different than they seem.

If the policy discussion shifts to the drug war, however, most people on the right develop a case of cognitive dissonance, and it develops quicker than you can trigger a social justice warrior at a Donald Trump rally. We must be very careful not to lower ourselves to the level of the Marxist left wing that murdered over 100 million people in the 20th century. Their goal was equality, but the methods used to achieve it had the opposite effect. Inability to admit they could be wrong about their approach resulted in mass murder across the globe.

I want to see drug use lower, but the current policy is a failure. The war on drugs has cost over a trillion dollars, with lackluster results.  Use rates haven’t seen any significant changes, but the damage to our civil liberties has been catastrophic. Particularly troubling, is the number of gun rights supporters who are against decriminalizing marijuana, even for the sick and injured. Every single gun control act was in response to a post prohibition crime wave. There would be no need for the NRA or Florida Carry Inc. without drug prohibition. It is a bold statement, but I ask that you bear with me, and let the facts, rather than your emotions, determine your response. Below is an article and graphs showing the use of drugs has increased, despite our best efforts.

END_OF_DOCUMENT_TOKEN_TO_BE_REPLACED

According to this analysis, Hillary will beat Trump, and Sanders would have an even better chance against Trump. Read the article Eric Grenier’s of CBC News here.

What seems to be happening now is something that I have been thinking for a while would happen. I always thought that as the demographic groups that normally vote Republican continued to shrink in size and lose power politically, they would become more militant and try to go down with a fight. I figured that at some point the Repugs might actually adopt what has been called the “Sailer strategy” and essentially become the party of “white nationalism lite” (like the Euronationalist parties in Europe, e.g. Front National, Sweden Democrats, etc).

It seems to actually be happening now with the Trump phenomenon, and it’s happening quicker than I thought it would. I suspect if the GOP becomes the party of Trumpism on a permanent basis the neocons will go back to the Democratic Party, since they came from there originally, and join the Hillaryites, or whoever succeeds her. I think this would largely guarantee Democratic dominance in national politics and the US would be essentially a one-party state. The GOP would be a fringe party, and it might split into two fringe parties, one the party of Trumpism and one the party that attempts to continue the old Reagan coalition. Meanwhile, the Democraps would be faced with an insurgency from the left in their own ranks. It’s happening now with Sanders, and it may take on a more radical form in the future.

END_OF_DOCUMENT_TOKEN_TO_BE_REPLACED

The full transcript of my recent interview with the C-Realm podcast.

Keith Preston: Thank you for having me.

KMO: I have been listening to your podcasts. I live in New York city. My children live near Baltimore, and I drive there every now and again to visit them. And so, I have a lot of time to listen to big chunks of people’s podcast archives. So, just recently I listened to probably 3 or 4 of your shows over the course of a couple of days. And they’re pretty dense, I have to say, and erudite. Very impressive. And I feel like I have been enriched by those drives.

KMO: You have a great turn of phrase that I want to get around to, and that is “totalitarian humanism.” But rather than dive right into that, I would like to invite you to just say more about your general project of the work that you do with podcasting and writing.

END_OF_DOCUMENT_TOKEN_TO_BE_REPLACED

Last week Neil Franklin, a retired major from Marylyn State Police, led a troop of serving and former police chiefs, soldiers and a former spy into the Parliament to call MPs to end the war on drugs. Their testimony was damning and revealing.

Franklin opened the meeting with an explanation of the campaign’s mission to “reduce crime, disease, death and addiction by ending the most socially destructive public policy since slavery.” Franklin explained how his organisation of “police officers, agents, judges, criminal prosecutors, corrections officials and others” including over 180,000 members and supporters in over 180 countries share one goal, to end “the world’s longest war”.

According to Franklin “we have been attempting to solve a public health crisis with criminal justice solutions and the results have been catastrophic”. While repeated calls from academia and public health have failed to convince most politicians, the group hopes calls from within the criminal justice system will finally make them listen. What follows are all direct quotes, edited for concision.

“When I look back at my time in the police I feel ashamed, I feel a sense of failure. I feel ashamed that I wasn’t arresting career criminals. I was arresting people from poor socially deprived areas with little or no hope whose crime was non-violent drug possession, a complete failure of the war on drugs. I believe that one of the biggest barriers for people with problematic substance misuse to seeking help and treatment is the current drug policy. It does nothing, it achieves nothing except creating more harm for individuals, families and society as a whole. All of us know the problems and what we need to do but rather than be united by the problems let’s be united by the solutions. Solutions based in health, education and compassion rather than criminalisation.”

My recent appearance on Alt Right.

Andy and Colin are joined by political analyst Keith Preston of Attack the System to talk about the Trump phenomenon and why a man who essentially makes sensible, middle-of-the-road statements so successfully “triggers” the media, the establishment, and the Left, and what this reveals about the deeply unhealthy nature of American society and its economy.