I have long been a vocal supporter of the Kurds, even before the Syrian clusterfuck sparked the Rojava Revolution. Part of this comes from my checkered past as a lapsed Tankie-Guevarist. I grew up gorging myself on New Left folk tails of Third World rebellion. The fearsome PKK were one of a dozen or so clans of crimson bearded renegades, fighting like Castro for some post-colonial utopia. I read everything I could find about the Bolshevik adventures of groups like FARC, Hezbollah and the Naxalites. But the thing that set the Kurds apart was their fourth quarter conversion to anarchism which closely mirrored my own.

Abdullah Ocalan discovered the works of Murray Bookchin right around the time I dropped communism for panarchy and syndicalism. And when the wrest of Syria sunk into CIA sponsored Salafi hell, the Ocalan influenced Kurds of the YPG created a successful stateless society that flourished amidst the chaos. It was proof positive that anarchism could work. But it was all over the moment the YPG accepted the poison gift of American military occupation. Anarchism quite simply cannot coexist with the greatest source of imperial tyranny on the fucking planet. The only sick comfort I took in this nauseating arrangement is that I knew it wouldn’t last. That’s because, dearest motherfuckers, screwing over the Kurds is a time-honored American pastime.

The original Kurdish screwjob was the work of that whimsical Bond villain known as Henry Kissinger. During his busy time as Secretary of State and National Security Adviser under Nixon and Ford, respectively, Henry cooked up a devilish little scheme with the help of his flunkies in Israel and the Shah’s Iran. Iraq was becoming suspiciously cozy with the Soviet Union. So they flooded Iraq’s long suffering Kurdish independence movement with Soviet hardware pilfered from the killing fields of Vietnam and the Sinai Peninsula. Mustafa Barzani, the founding father of the modern Peshmerga, didn’t trust the Shah farther than he could squeeze his ham-fist up his pinched little quisling asshole, no sane Mesopotamian did, but he believed in his heart of hearts that America was that shining beacon of freedom on the hill. Mustafa was a sucker. Once Henry and Co. managed to frighten Iraq into playing ball, we quickly drummed up a deal between them and Iran that included handing over the Kurds on a spit. Not only did old Henry, that Nobel pacifist, refuse to even return Mustafa’s frantic calls for help, he cut all humanitarian aide to the region as Helter Skelter came tumbling down. The Kurds were slaughtered and Kissinger summed up America’s Kurdish policy in a nutshell when he told a disgusted congress that “One should not confuse undercover action with social work.” If only the Kurds took his advice.

It is either a fallacy, or a pure symbolic violence, to continue to assume the “Kurdish Question” as unresolved.

For scholars, policy experts and political bureaucrats the Kurdish Question, with its complex sub and supra-national political implications, remains as the most pertinent dilemma of our modern times. The epic resistance that occurred against Daesh by the YPG-YPJ propelled the Kurdish Question into the international spotlight like never before. Seminar and conferences are held, papers and books are written at a rapid pace and people across social media flock to the hundreds of pro-Kurdish pages and sites thirsty for information.

And perhaps the clinical label of Kurdish Question was employable, for the Kurds and their stubborn refusal to assimilate and Turkify, Arabize or Persianize resulted in increasing levels of violence by the states to address this ‘problem’. Consequently, for decades the Kurds faced ethnic cleansing, ethnic displacement, Arabization policies, genocides, and loss of even the most rudimentary human rights, resulting from the arbitrary and artificial states who themselves were produced by violent colonial pens. Artificial states and their repressive and ideological machinations promoted violent, exclusionary, oppressive unitary identity politics resulting in the construction of imagined national identities and mythical one history, one nation, one language and one flag constructs. This blood saturated identity was not unique to only post-colonial states, but structurally to all modern ‘nation-states’

END_OF_DOCUMENT_TOKEN_TO_BE_REPLACED

Part of the problem is that the Kurds are caught between a rock and a hard place. The Western axis within global capitalism is trying to coopt the Kurds as a tool to be used against the Eastern axis, and the Eastern axis realizes this and is trying to suppress the Kurds. That’s why so many publications that represent the Socialist hard Left are stridently anti-Kurd. The situation is a case study in why we need to build an alliance of separatists and independence movements from the bottom up that are mutually supportive of each other in a way that will make it less necessary for independence movements to receive support from major powers.

Abdullah Ocalan, the leader of the PKK, took inspiration from American anarchist Murray Bookchin in creating his philosophy, which he calls “Democratic Confederalism.”

The PKK spin-off group YPG represents most of the Syrian Democratic Forces (SDF) in Syria.

With Western political support, they have gained popularity and garnered an impressive amount of support from anarchists and military veterans in the West, some of whom have left the comfort of their home countries to fight with the group.

One of their most productive marketing tools has been to use young, attractive female fighters as the face of the guerrillas. During their fight against Daesh, the PKK has saturated the media with images of these young female “freedom fighters,” using them as a marketing tool to take their cause from obscurity to fame. Some of these female fighters in the YPJ are fighting alongside their male counterparts under the direction of the U.S. in the SDF.

How ironic that the overlords of the American Empire might be backing the Murray Bookchin-inspired libertarian socialist insurgents of the Kurdish territory. But this is actually in keeping with a strategy that I have long advocated for anarchist, anti-state and anti-imperalist movements around the world, i.e. building on the ground resistance while seeking aid from the official enemy of whatever state they’re fighting. Consequently, the on the ground resistance movements located in the nations of the Anglo-American-Zionist-Wahhabist axis should seek aid from the nations of the BICS-Shia-Global South axis, and vice versa. It is perfectly appropriate for the Kurds to accept aid from the USA just as it would be perfectly appropriate for the EZLN, Calexit or the Republic of Texas to accept aid from the Russians, Iranians, and Chinese. 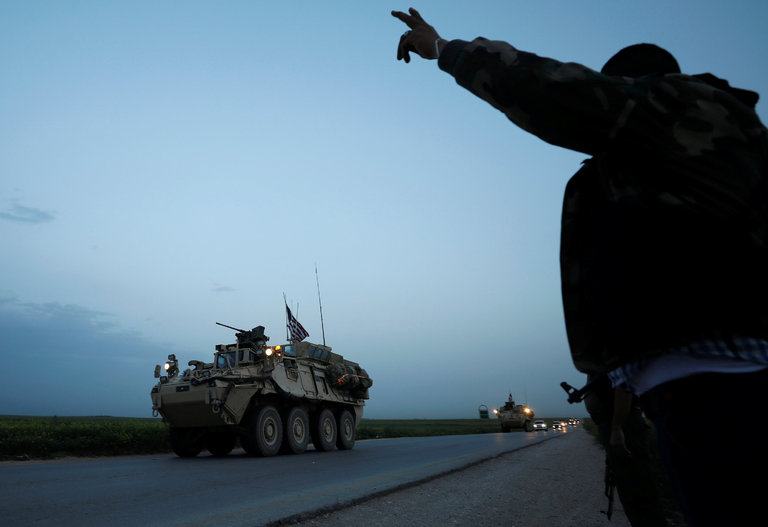 WASHINGTON — President Trump has approved a plan to arm Syrian Kurds so they can participate in the battle to retake Raqqa from the Islamic State, a strategy that has drawn deep opposition from Turkey, a NATO ally.

American military commanders have long argued that arming the Y.P.G., a Kurdish militia fighting alongside Syrian Arab forces against the Islamic State, is the fastest way to seize Raqqa, the capital of the militants’ self-proclaimed caliphate.

And Mr. Trump, who made fighting Islamist militants a priority during his campaign, again showed the high regard he has for Pentagon generals by endorsing their advice when faced with a policy dilemma.